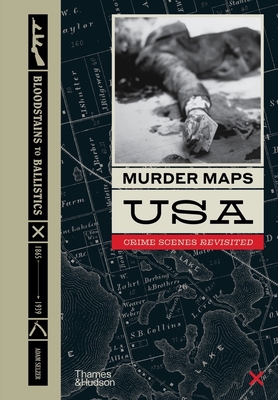 Vivid and intriguing, Murder Maps USA plots the most remarkable American homicides between the Civil War and WWII onto maps and plans, alongside haunting crime scene photographs and compelling expert analysis.

The most sensational and intriguing murders from across the United States are reexamined in this disquieting volume, which introduces readers to the most lethal killers from every state. Uncovering homicides from a seminal period of American criminal history, this compendium covers from the end of the Civil War to the beginning of WWII, the era that saw the first murderer convicted using fingerprints and the birth of the FBI laboratory.

Every murder case is accompanied by a contemporary map or bespoke floorplan on which the precise movements of both killer and victim are meticulously plotted, revealing the vital components of each crime. The gruesome scene is completed with early mugshots and unnerving crime scene photographs, bringing to life blood-soaked Wild West bars, inner city ganglands, and the deadly plots behind famous assassinations.

The killers featured range from the black widow Belle Gunness, who lured numerous victims to her Illinois farm, to Cleveland’s “Mad Butcher,” and from the infamous Texan bank robbers Bonnie and Clyde to the devious Petrillo cousins in Philadelphia and their contract killing service.

Crime expert Adam Selzer illuminates the details of each case, recounting the shocking details of the crimes themselves, and the ingenious detective work and breakthrough forensics that solved them. His bloodthirsty tour of America’s criminal underworld uncovers the ruthless scheming of murderers both infamous and little-known, providing a hair-raising anthology that will appeal to anyone with a taste for murder.

Adam Selzer is an author and researcher specializing in the secret side of history. He has been a tour guide in New York and Chicago, and has authored over twenty books. Titles include multiple works of crime history, including H. H. Holmes: The True Story of the White City Devil, Mysterious Chicago, and The Ghosts of Chicago. He regularly appears on TV and radio.
Engrossing... Readers interested in true crime and forensics will appreciate Selzer's singular volume.
— Library Journal

If someone you know loves 'C.S.I.' and reading, give them Murder Maps USA, which revisits notorious murders from the Civil War to World War II.

Stuffed with archival newspaper clippings, vintage illustrations, mugshots, timelines, deeply disquieting photos and, of course, maps that plot where the killings occurred, the book is a veritable cornucopia of crime.
— The New York Times Book Review

The perfect crime rarely is. Even the cleverest killer can slip up somewhere. A footprint in the flower bed, a fingerprint on a doorknob, a strand of hair by the body—something’s always left behind. Adam Selzer’s Murder Maps USA: Crime Scenes Revisited details dozens of these stray clues, and the killers they helped catch.