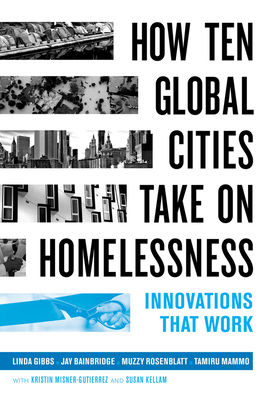 Ten Global Cities will be an invaluable resource not only for students of policy and social work but for municipal, regional, and national policymakers; nonprofit service providers; community advocates and activists; and all citizens who want to collaborate for real change. These authors argue that homelessness is not an insurmountable social condition, and their examples show that cities and individuals working in coordination can lead the charge for better outcomes.

Linda Gibbs is Principal for Social Services at Bloomberg Associates and is a Senior Fellow at Results for America. She served in the New York City government as the Commissioner overseeing homelessness until 2005 and then as Deputy Mayor for Health and Human Services until 2013.

Jay Bainbridge  is Associate Professor of Public Administration at Marist College. He worked in New York City government on its first homeless street count and continues to consult on homeless services for national and international cities.

Tamiru Mammo is a consultant manager of Social Services at Bloomberg Associates, where he has led homeless reform efforts in US and international cities. Previously, he worked as a health advisor in New York City’s Mayor’s Office and as Chief of Staff to the President of NYC Health and Hospitals Corporation.
"The book is a valuable resource for those interested in how cities have succeeded in tackling some of the causes and consequences of homelessness. . . . It offers a refreshing hands-on contribution that not only identifies the problems around homelessness but, crucially, provides specific examples and evidence from many different settings about what can be done to overcome it."
— LSE Review of Books

"Its real-world examples provide digestible and valuable information to the public—especially to advocates who are beginning a vocation in the field. . . . The book demonstrates that, thanks to the passion and determination of homeless-service system actors, innovative approaches in outreach and housing-first models have emerged and been successful."
— Stanford Social Innovation Review