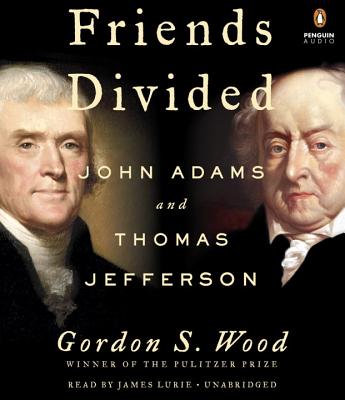 From the great historian of the American Revolution, New York Times-bestselling and Pulitzer-winning Gordon Wood, comes a majestic dual biography of two of America's most enduringly fascinating figures, whose partnership helped birth a nation, and whose subsequent falling out did much to fix its course.

Thomas Jefferson and John Adams could scarcely have come from more different worlds, or been more different in temperament. Jefferson, the optimist with enough faith in the innate goodness of his fellow man to be democracy's champion, was an aristocratic Southern slaveowner, while Adams, the overachiever from New England's rising middling classes, painfully aware he was no aristocrat, was a skeptic about popular rule and a defender of a more elitist view of government. They worked closely in the crucible of revolution, crafting the Declaration of Independence and leading, with Franklin, the diplomatic effort that brought France into the fight. But ultimately, their profound differences would lead to a fundamental crisis, in their friendship and in the nation writ large, as they became the figureheads of two entirely new forces, the first American political parties. It was a bitter breach, lasting through the presidential administrations of both men, and beyond.

But late in life, something remarkable happened: these two men were nudged into reconciliation. What started as a grudging trickle of correspondence became a great flood, and a friendship was rekindled, over the course of hundreds of letters. In their final years they were the last surviving founding fathers and cherished their role in this mighty young republic as it approached the half century mark in 1826. At last, on the afternoon of July 4th, 50 years to the day after the signing of the Declaration, Adams let out a sigh and said, "At least Jefferson still lives." He died soon thereafter. In fact, a few hours earlier on that same day, far to the south in his home in Monticello, Jefferson died as well.

Arguably no relationship in this country's history carries as much freight as that of John Adams of Massachusetts and Thomas Jefferson of Virginia. Gordon Wood has more than done justice to these entwined lives and their meaning; he has written a magnificent new addition to America's collective story.

Gordon S. Wood is the Alva O. Way University Professor and professor of history at Brown University. His books have received the Pulitzer, Bancroft and John H. Dunning prizes, as well as a National Book Award nomination and the New York Historical Society Prize in American History. They include Empire of Liberty: A History of the Early Republic, Revolutionary Characters, The Purpose of the Past, The Americanization of Benjamin Franklin, and The Idea of America.

“This is an engrossing story, which Wood tells with a mastery of detail and a modern plainness of expression that makes a refreshing contrast with the 18th century locutions of his subjects.”  —The New York Times Book Review

“Lucid and learned… Wood has become the leading historian of the ‘Founding Fathers’… Never has John Adams been more relevant than today.” —The Wall Street Journal

"Whenever I read Gordon Wood, the dean of eighteenth century American historians, I feel as if I am absorbing wisdom at the feet of the master. Friends Divided is teeming with exceptionally acute and unvarnished insights into Thomas Jefferson and John Adams as they do battle for the nation's soul. Jefferson's sunny, almost Panglossian, optimism, juxtaposed with the dark, dyspeptic musings of Adams, presents readers with nothing less than a vivid composite portrait of the American mind." —Ron Chernow, author of Grant and Alexander Hamilton

“This magisterial double biography recounts not only the lives of these two greatest founders but also the creation of the republic. It describes the world’s first successful democratic revolution and the founding of the first non-monarchical republic. . .  it is a book about ideas as represented by two philosophical statesmen, and it makes political history and philosophy exciting. . . In Wood’s hands, Adams and Jefferson become Shakespearean in stature.” —Edith B. Gelles, The Washington Post

“Excellent . . . Friends Divided is an engaging book that's sure to appeal to anyone with an abiding interest in Revolution-era America and the leaders who shaped the country. Beautifully written and with real insight into Jefferson and Adams, it's a worthy addition to the canon, and yet another compelling book from Wood.” —NPR

“For decades now Gordon S. Wood, the Alva O. Way university professor of history at Brown and winner of the Pulitzer Prize, has been the go-to authority on everything related to the American Revolution. That Wood has written “Friends Divided’’ — a finely-crafted dual biography of Adams and Jefferson — is therefore a hearty cause for celebration. Every page sparkles with literary eloquence, flawless analysis, and dramatically plotted history that contains a lesson for a riven time.” — Douglas Brinkley, Boston Globe

“Gordon Wood is one of America’s premier historians and a national treasure. Winner of the Pulitzer as well as the Bancroft Prize, he is a rare scholar who writes with a combination of insight, academic depth, and accessible prose. In his latest book, penned at the summit of his career, Wood now sets his sights on the relationship of two of America’s most remarkable and fascinating statesmen, Thomas Jefferson and John Adams. The story is enthralling…In this magnificent book, Gordon Wood has continued his invaluable work.” — Jay Winik, National Review

“The acclaimed historian engages in a compelling examination of the complex relationship of the Founding Fathers…Among the other well-known personages in the narrative are Abigail Adams, Alexander Hamilton, and Benjamin Rush, all portrayed vividly by the author, whose approachable writing style is equal to his impressive archival research…An illuminating history of early Americans that is especially timely in the ugly, partisan-filled age of Trump.” —Kirkus Reviews, starred review

"As the dean of American historians, Gordon Wood had long shaped the nation's thinking about the true nature of the Founding. Now he turns his intellectual honesty and clear-eyed prose to the lives of Jefferson and of Adams, giving us a brilliant portrait of their complicated relationship. This is an indispensable account of two men, of the country they built, and of why their legacies matter even now. Bravo!" —Jon Meacham, author of American Lion and of Thomas Jefferson: The Art of Power

“America's dialogue with its competing impulses had its origins in the fractured friendship of John Adams and Thomas Jefferson.  Gordon Wood brings his unmatched knowledge of the scholarly literature to the task of recovering both sides of what is still America's longstanding argument with itself.” —Joseph J. Ellis, author of the forthcoming Then and Now: The Founders and US