Empress of the Nile: The Daredevil Archaeologist Who Saved Egypt's Ancient Temples from Destruction (Hardcover) 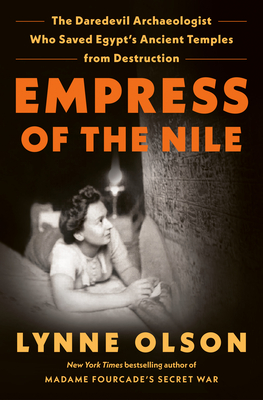 Empress of the Nile: The Daredevil Archaeologist Who Saved Egypt's Ancient Temples from Destruction (Hardcover)


Coming Soon - Available for Pre-Order Now
The remarkable story of the intrepid French archaeologist who led the international effort to save ancient Egyptian temples from the floodwaters of the Aswan Dam, by the New York Times bestselling author of Madame Fourcade’s Secret War

In the 1960s, the world’s attention was focused on a nail-biting race against time: Fifty countries contributed nearly a billion dollars to save a dozen ancient Egyptian temples, built during the height of the pharaohs’ rule, from drowning in the floodwaters of the massive new Aswan High Dam. But the extensive press coverage at the time overlooked the gutsy French archaeologist who made it all happen. Without the intervention of Christiane Desroches-Noblecourt, the temples would now be at the bottom of a vast reservoir. It was an unimaginably large and complex project that required the fragile sandstone temples to be dismantled, stone by stone, and rebuilt on higher ground.

A willful real-life version of Indiana Jones, Desroches-Noblecourt refused to be cowed by anyone or anything. During World War II she joined the French Resistance and was held by the Nazis; in her fight to save the temples she challenged two of the postwar world’s most daunting leaders, Egypt’s President Nasser and France’s President de Gaulle. As she told a reporter, “You don’t get anywhere without a fight, you know.”

Yet Desroches-Noblecourt was not the only woman who played an essential role in the historic endeavor. The other was Jacqueline Kennedy, who persuaded her husband to call on Congress to help fund the rescue effort. After years of Western plunder of Egypt’s ancient monuments, Desroches-Noblecourt did the opposite. She helped preserve a crucial part of Egypt’s cultural heritage, and made sure it remained in its homeland.
Lynne Olson is the New York Times bestselling author of Madame Fourcade’s Secret War, Last Hope Island, Those Angry Days, and Citizens of London. She has been a consulting historian for the United States Holocaust Memorial Museum in Washington, D.C., and the National WWII Museum in New Orleans. She lives in Washington, D.C.
“A well-documented and sensitive portrait of a remarkable woman who shared her passion for Egypt and inspired so many others, myself included, to find their calling, while at the same time helping to reinvigorate the Louvre.”—Henri Loyrette, former president and director of the Louvre Museum

“Lynne Olson’s many fans know her gift for storytelling and for bringing to life heroes who may not be well known but who demand—indeed, rivet—our attention. Who else but Olson could have found Christiane Desroches-Noblecourt, a French resistance fighter brazen enough to tell her Gestapo interrogators to stand up when a woman enters the room, who also happens to be a kind of female Indiana Jones working behind the scenes—alongside Jackie Kennedy!—to save the ancient temples of Egypt? Readers will devour this wonderful book.”—Evan Thomas, author of First: Sandra Day O’Connor

“Once again, Lynne Olson introduces us to a modern heroine who defied the odds and achieved historic results. Empress of the Nile is a tonic for our times and a reminder that one unstoppable woman can bend history to her will.”—Kati Marton, author of The Chancellor

“Christiane Desroches-Noblecourt was one of the leading Egyptologists of the twentieth century, yet her remarkable achievements have received little attention. Lynne Olson has done her justice with this comprehensive biography.”—Toby Wilkinson, author of The Rise and Fall of Ancient Egypt

“Empress of the Nile is the best sort of micro-history: both an intimate portrait of a groundbreaking woman and a whirlwind tour through major events and personalities of the twentieth century.”—Lauren Willig, author of Band of Sisters

“Lynne Olson has found yet another fascinating unsung heroine: a French archaeologist with the moxie to take on the Egyptians, the Americans, and the French to save historic Egyptian temples.”—Meryl Gordon, author of Bunny Mellon

“Empress of the Nile is an exhilarating, in-depth look at a woman whose courage never faltered, whether she was facing Nazi interrogators, backstabbing archaeologist colleagues, or the imminent destruction of the Egyptian monuments and artifacts she held most dear. Olson’s richly detailed, heart-stopping biography takes the reader for a magnificent ride.”—Fiona Davis, New York Times bestselling author of The Magnolia Palace

“This is a captivating portrait of a pathbreaking woman. Readers will be enthralled.”—Publishers Weekly (starred review)