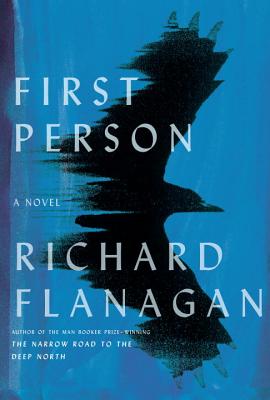 In the citation for his Man Booker Prize, judges referred to Flanagan's prose "of extraordinary elegance and force," in The Narrow Road to the Deep North, for which the author visited here just prior to the award. The protagonist of First Person accepts a job to ghostwrite the autobiography of a notorious, egotistical, con-man celebrity, and in the process begins to lose his own identity and its mooring to his family. Clever, suspenseful, elegant writing, and a parable for our age: "You think you know him, and then find out you don't know anything. You think he's telling the truth and it turns out to be all lies. Maybe he doesn't even care about the money and it's just a game."

— From Richard's 2018 Picks
Kif Kehlmann, a young, penniless writer, thinks he’s finally caught a break when he’s offered $10,000 to ghostwrite the memoir of Siegfried “Ziggy” Heidl, the notorious con man and corporate criminal. Ziggy is about to go to trial for defrauding banks for $700 million; they have six weeks to write the book.

But Ziggy swiftly proves almost impossible to work with: evasive, contradictory, and easily distracted by his still-running “business concerns”—which Kif worries may involve hiring hitmen from their shared office. Worse, Kif finds himself being pulled into an odd, hypnotic, and ever-closer orbit of all things Ziggy. As the deadline draws near, Kif becomes increasingly unsure if he is ghostwriting a memoir, or if Ziggy is rewriting him—his life, his future, and the very nature of the truth.

By turns comic, compelling, and finally chilling, First Person is a haunting look at an age where fact is indistinguishable from fiction, and freedom is traded for a false idea of progress.
RICHARD FLANAGAN's novels, Death of a River Guide, The Sound of One Hand Clapping, Gould's Book of Fish, The Unknown Terrorist, Wanting, and The Narrow Road to the Deep North, for which he was awarded the 2014 Man Booker Prize, are published in 42 countries. He lives in Tasmania.
“Richard Flanagan is among the most versatile writers in the English language. That he is also an environmental activist and the author of numerous influential works of nonfiction makes his achievement all the more remarkable. Each of Flanagan’s seven novels is distinct from the others, as if they are by different writers; each is a tour de force of its own kind, and several have been called ‘masterpieces’ by reviewers—as if a gifted writer might be expected to have a ‘masterpiece’ with each publication rather than once in a career . . . First Person is a kind of twenty-first-century Picture of Dorian Gray . . . Epiphanies and aphorisms abound: gem-like remarks [and] unexpected insights.”—Joyce Carol Oates, New York Review of Books

“The novel, with its switchbacking recollections and cyclical dialogue, its penetrating scenes of birth and, eventually, death, is enigmatic and mesmerizing.”
—The New Yorker

“Heidl as a character is deeply compelling, and Flanagan writes with acute sensitivity about Kif’s swelling anxieties made deeper by his gradually crumbling marriage.”
—Olen Steinhauer, The New York Times Book Review

“An aria on the necessity of self-invention, on the loops and lacunas of memory and bullish inadequacy of all language . . . Boasts a shimmering ingenuity and ominousness . . . At a time when our truth is daily contorted, debauched or ignored, we require Flanagan’s artful reminder of the wreckage caused by our unwillingness to say what happened.”—William Giraldi, The Washington Post

“Fascinating and unsettling . . . It is an arresting premise for an ambitious novel about both the process of writing and the chances of finding truth in a world that fashions itself admiringly, almost enviously, after the lives of Heidls and Madoffs.”
—Steven Whitton, Anniston Star

“An acerbic exploration of how the contemporary world came to be defined by lies, deceit, and obfuscation . . . Full of hilarious asides, this sonorous, blackly comic novel offers searing insight into our times.” —Booklist (starred)


Reviews from the UK:

“Flanagan writes with a searing truth . . . First Person is both comic and frightening. At times I caught a glimpse of Money-era Martin Amis . . . And there’s a hint, too, of an epochal gloom that is redolent of The Great Gatsby . . . There are also passages touched with the virtuosity that shone so brightly in The Narrow Road that are pure Flanagan . . . First Person is studded with sharp, breath-catching observations about the finite nature of life.” —Financial Times

“First Person is a serious treatment of important modern issues (corporate corruption, exploitation of trust, the impudent dismissal of truth).” —The Sunday Times

“As unsettling as it is inspired.”  —Esquire

“Absorbing . . . The strength of the novel rests in its mordant intelligence, in its recognition that the world today is essentially Ziggy’s, one of make-believe and denial.” —The Scotsman

“A black comedy about the unreliability of memory and the warped values of modern publishing. But the beauty of First Person is the way it blossoms into a much richer novel than that outline scenario suggests . . . Both readable and thought-provoking.” —The Irish Mail on Sunday

“Scathingly funny . . . Also a profound and thought-provoking novel that explores the nature of truth, lies, and fiction.”  —The Bookseller

“A powerful, funny, disturbing, moving—and, unironically, albeit paradoxically—real distillation of the themes that have preoccupied Flanagan [throughout his career] . . . While some Booker winners struggle to achieve the same critical acclaim for their next book, Flanagan, with this intensely personal novel, may have written an even better one. And when he candidly and honestly confronts the raw truths of the writing life and the family life, material and spiritual poverty, love and despair and desire, he touches on genuine brilliance.” —The Australian

“A triumph . . . The informed consensus since early novels including Death of a River Guide and The Sound of One Hand Clapping is that Flanagan is Australia’s greatest living novelist. His newie, First Person, superglues him to the pedestal . . . First Person is a parable for the age of Trump . . . This is a book of demonic possession, of obsession, and there’s a zinger of thought, of expression, in every paragraph . . . As harrowing a book as any I’ve read.” —The Weekend Australian Magazine

“No one has written better than Henry James about the vocation of writing, its isolate ecstasies and public humiliations, and the implacable demands it places upon those who devote their lives to its practice . . . Similarly, no one in contemporary Australian literature has enunciated so clearly and with such vehemence the desire to become a writer in this pure, Jamesian sense as Richard Flanagan . . . Flanagan’s latest may seem a lighthearted subject after the horrors of war explored in Narrow Road. But it is not. It is a fiction even darker still . . . The obscure horror we feel trembling at the edge of Flanagan’s new novel is the sense that the way of life we have chosen as a society involves the subordination of every aspect of our lives to an ideology that is hostile to the old verities at the heart of the novel, at the heart of the human.” —The Monthly

“Haunting . . . The tale of a ghostwriter overwhelmed by the darkness surrounding his dubious subject.”  —The Weekly Review