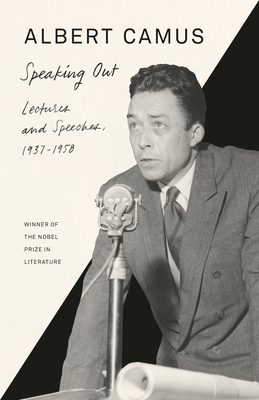 
Backordered -- Email or Call for Availability
The Nobel Prize winner's most influential and enduring lectures and speeches, newly translated by Quintin Hoare, in what is the first English language publication of this collection.

Albert Camus (1913-1960) is unsurpassed among writers for a body of work that animates the wonder and absurdity of existence. Speaking Out: Lectures and Speeches, 1938-1958 brings together, for the first time, thirty-four public statements from across Camus's career that reveal his radical commitment to justice around the world and his role as a public intellectual.

From his 1946 lecture at Columbia University about humanity's moral decline, his 1951 BBC broadcast commenting on Britain's general election, and his strident appeal during the Algerian conflict for a civilian truce between Algeria and France, to his speeches on Dostoevsky and Don Quixote, this crucial new collection reflects the scope of Camus's political and cultural influence.
Born in Algeria in 1913, ALBERT CAMUS published The Stranger--now one of the most widely read novels of this century--in 1942. He was awarded the Nobel Prize in Literature in 1957. On January 4, 1960, he was killed in a car accident. QUINTIN HOARE is an award-winning translator. His translations from French have included works by Sartre (for whose War Diaries he won the Scott-Moncrieff Prize), Simone de Beauvoir, Paul Nizan, and Jean-Jacques Rousseau.