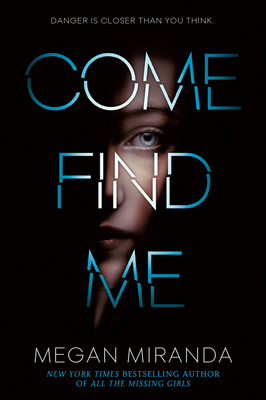 
Usually Arrives in Store in 1-5 Days
From the New York Times bestselling author of All the Missing Girls and The Perfect Stranger comes a captivating thriller about two teens connected by family tragedies and a mysterious otherworldly radio frequency signal.

Six months ago, Kennedy Jones suffered a horrible family tragedy, and since then she's lived with her uncle, sneaking out only occasionally to visit her childhood home.

Nearby, Nolan Chandler is determined to find out what really happened to his brother, who disappeared without a trace two years earlier.

Then Kennedy and Nolan find themselves drawn together by strange signs--for Kennedy, it's a disturbing pattern on her brother's radio telescope; for Nolan, it's a mysterious frequency coming from his brother's bedroom. When they realize their brothers also share dark pasts, they begin to wonder whether something is coming for them. Or are the signals a warning that something's already here?

"[Miranda's] latest book for young adults ages the kids from Stranger Things and puts them in Gillian Flynn's Dark Places for a smart, dark, and ultimately hopeful story of the power of belief."--Booklist, starred review
Megan Miranda is the acclaimed author of Fragments of the Lost, The Safest Lies, Fracture, and several other novels for young adults. She is also the New York Times bestselling author of All the Missing Girls and The Perfect Stranger, and The Last House Guest for adults. She lives in North Carolina with her husband and two children. You can follow Megan on Facebook at AuthorMeganMiranda, or on Instagram and Twitter at @MeganLMiranda.
"Miranda (All the Missing Girls, 2016) has created a compelling pair of protagonists, filled with heartfelt angst and relentless tenacity." —Booklist, starred review

Miranda's exploration of how grief transforms us is realistic and sensitively drawn. . . . Eerie and emotionally resonant." —Kirkus

"This sensitive and nuanced depiction of grief in all of its forms will surely engross fans of crime stories and family dramas alike." —SLJ

"Readers looking for a mystery with a fresh take on the ultimately irresolvable difference between intuition and ratiocination will appreciate this." —The Bulletin

Fragments of the Lost:
"For thriller fans who can't get enough of the genre." —Kirkus

“Readers who love a little bit of romance with their thrills and chills will love this new young adult novel.” —Bookish.com

Additional Works by Megan Miranda:
"This thriller's all of your fav page-turners (think: Luckiest Girl Alive, The Girl on the Train, Gone Girl) rolled into one." –TheSkimm

"Extremely interesting . . . a novel that will probably be called Hitchcockian." –New York Times