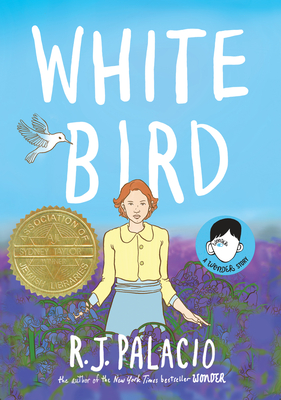 “R.J. Palacio’s White Bird is a gripping tale about the incredible power of kindness. This memorable graphic novel introduces readers to one of history’s darkest eras. Fans of the Wonder stories will appreciate the tale of Julien’s grandmother, and all readers will be inspired by White Bird’s message of goodness in the face of evil.”
— Christopher Rose, The Spirit of '76 Bookstore, Marblehead, MA

Soon to be a major motion picture, starring Helen Mirren and Gillian Anderson!

"I was captivated by White Bird. It tells the hardest truths with honesty and calm (so that young readers can hear them). R.J. Palacio brings to life the nature of heroism and the real risks we face today." --Meg Medina, Newbery award-winning author of Mercy Suarez Changes Gears

In R. J. Palacio's bestselling collection of stories Auggie & Me, which expands on characters in Wonder, readers were introduced to Julian's grandmother, Grandmère. Here, Palacio makes her graphic novel debut with Grandmère's heartrending story: how she, a young Jewish girl, was hidden by a family in a Nazi-occupied French village during World War II; how the boy she and her classmates once shunned became her savior and best friend.

Sara's harrowing experience movingly demonstrates the power of kindness to change hearts, build bridges, and even save lives. As Grandmère tells Julian, "It always takes courage to be kind, but in those days, such kindness could cost you everything." With poignant symbolism and gorgeous artwork that brings Sara's story out of the past and cements it firmly in this moment in history, White Bird is sure to captivate anyone who was moved by the book Wonder or the blockbuster movie adaptation and its message.

"In a wonder of a debut, Palacio has written a crackling page-turner filled with characters you can't help but root for." --Entertainment Weekly

"A beautiful, funny and sometimes sob-making story of quiet transformation." --The Wall Street Journal
R. J. Palacio lives in New York City with her husband, two sons, and two dogs. For more than twenty years, she was an art director and graphic designer, designing book jackets for other people while waiting for the perfect time in her life to start writing her own novel. But one day several years ago, a chance encounter with an extraordinary child in front of an ice cream store made R.J. realize that the perfect time to write that novel had finally come. Wonder is her first novel. She did not design the cover, but she sure does love it. Her other books include 365 Days of Wonder: Mr. Browne's Book of Precepts, Auggie & Me: Three Wonder Stories, and We're All Wonders. Learn more about her at rjpalacio.com or on Twitter at @RJPalacio.
A New York Public Library Best Book of the Year
Sydney Taylor Book Award Winner

"At once expressive and chaste, an elusive but ideal combination." —New York Times

"A story that shows the impact of the Second World War and the rise of fascism on what had been a pastoral, fairy-tale childhood, with White Bird pulling no punches in connecting that historical moment to what’s happening in the world today." —The Hollywood Reporter

“Extraordinarily powerful.... White Bird does not shrink from depicting the terror and violence of the Nazi occupation for younger readers, and respects the ability of those readers to handle strong material.” —Forbes

"A must-read graphic novel that is both heart-rending and beautifully hopeful." —Kirkus Reviews, starred review

"A story of resistance, bravery, and survival.... This compelling story is served well by the graphic novel format." —Booklist

“Sure to be popular among fans of Wonder and educators who want to connect past to present.” —School Library Journal