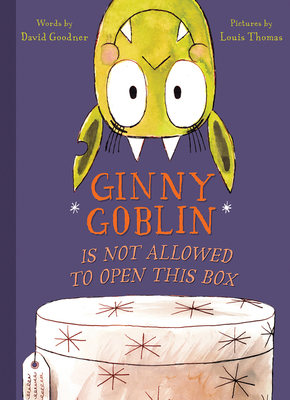 Ginny Goblin, a stubborn, problem-solving little girl, will capture your heart with her imagination and wit. While she is absolutely not allowed to open this box before dinner, nothing can stop Ginny from trying! Clever and hilarious, you will soon want to know what is in the box almost as much as Ginny. Almost.

Ginny Goblin is not allowed to open this box, but still she persists in this action-packed, laugh-out-loud debut for fans of Jon Klassen and Mo Willems.

Ginny Goblin has one simple rule to follow: She is not allowed to open this box. Not until dinnertime.

But Ginny Goblin doesn't like to follow the rules, so nothing will stop her from trying to open this box. Not a tall tower, not a misty mountain, not a frightful forest, and certainly not a murky moat filled with scaly, scary serpents . . .

But wait! What is in the box? You'll have to open this book to find out! (Don't worry, you're allowed.)

David Goodner lives in North Texas. He has an adoring wife and two tolerating cats. He works in a library where he gets to see all the new books before anybody else. When he’s not working or writing stories he likes to play role-playing games, make stuff, and read other people’s books (mostly science fiction and fantasy, but really if you leave a book out where David can find it, he’ll read it).

Louis Thomas graduated from Gobelins/Paris and Calarts/Los Angeles in 2012. After working in animation studios in California, he moved to France where he lives with his cat Pipo in his art studio between the Pantheon and the Luxembourg Garden. He is the author/illustrator of the book HUG IT OUT. Visit him at louist.blogspot.com and on Instagram @Louis_Thomas_Draw.

Never fear—readers do get to find out what’s in the box (“Now I’m really curious about what’s inside!” the narrator confesses), but the joy is all in the getting there."--Publishers Weekly

"Readers will completely identify with the overly invested narrator.... Hilarious text matches perfectly with the spare yet spot-on illustrations as an adorable and persistent goblin works hard to satisfy her curiosity."--School Library Journal

"Curiosity breeds ingenuity in this humorous story about a goblin determined to find out what’s inside a deep, round spangly box. "--Booklist