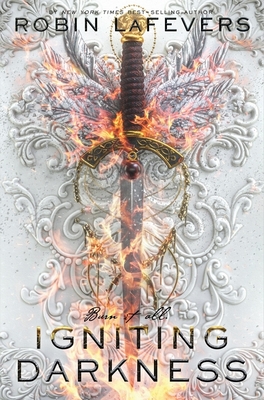 
Usually Arrives in Store in 1-5 Days
Two assassins will risk absolutely everything—even their own divinity—to save the people and the country they love in this lush historical fantasy from New York Times bestselling author Robin LaFevers. Set in the world of the beloved His Fair Assassin series, this smart, sensational follow up to Courting Darkness is perfect for fans of Leigh Bardugo and Holly Black.

When you count Death as a friend, who can stand as your enemy?

Sybella, novitiate of the convent of Saint Mortain and Death’s vengeance on earth, is still reeling from her God’s own passing, and along with him a guiding hand in her bloody work. But with her sisters on the run from their evil brother and under the watchful eye of her one true friend (and love) at court, the soldier known as Beast, Sybella stands alone as the Duchess of Brittany’s protector.

After months of seeking her out, Sybella has finally made contact with a fellow novitiate of the convent, Genevieve, a mole in the French court. But Sybella, having already drawn the ire of the French regent, may not be able to depend on her sister and ally as much as she hoped. Still, Death always finds a way, even if it’s not what one expects.

No one can be trusted and the wolves are always waiting in this thrilling conclusion to the Courting Darkness duology, set in the world of Robin’s beloved His Fair Assassin trilogy.

Robin LaFevers, author of the New York Times best-selling His Fair Assassin books, was raised on fairy tales, Bulfinch’s mythology, and nineteenth-century poetry. It is not surprising that she grew up to be a hopeless romantic. She was lucky enough to find her one true love, and is living happily ever after with him in California. Visit her online at robinlafevers.com and on Twitter @RLLaFevers.

"Rife with labyrinthine plotting, swoonworthy romance, and endless intrigue.... A thrilling ride and dazzling denouement."—Kirkus   "Readers are immersed in a violent and unjust 15th-century world, with heroines who are determined to make it safer and more equitable for women of all strata.... A marvelous mix of swashbuckling history and spiritually centered fantasy."—School Library Journal   "The writing in this installment... holds up beautifully, and the court intrigue and the undercover work of political females of all ranks and privileges continue to delight."—Booklist —