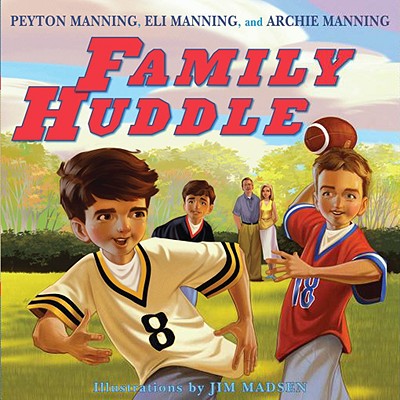 HUDDLE UP WITH THE MOST FAMOUS FAMILY IN FOOTBALL - THE MANNINGS
Pile into the car with Eli, Peyton and their older brother, Cooper in Family Huddle for a trip to visit their grandparents. Their dad, former NFL star Archie Manning, is at the wheel with Olivia at his side. Eli, Peyton and Cooper joke around and play football at every opportunity. The boys run fun plays like the buttonhook, quarterback sneak, and hook and ladder. Family and football will always be a big deal in the Manning family. Family Huddle is based on some of the Mannings memories from their days in Louisiana and Mississippi.

Peyton Manning is the Super Bowl winning quarterback for the Indianapolis Colts. He has earned three NFL Most Valuable Player Awards and is a nine-time Pro Bowl choice. In 1999, Peyton established The PeyBack Foundation to promote the future success of disadvantaged youth by assisting established programs that provide leadership and growth opportunities for children at risk. Peyton Manning and his wife, Ashley, live in Indianapolis, Indiana. Eli Manning has been the star quarterback for the New York Giants since 2004. He was named MVP of Super Bowl XLII in 2008 when he led the Giants to victory. Eli was later named the Sporting News 2008 Pro Athlete of the Year. Eli is a major supporter of St. Vincent\u2019s Catholic Medical Center, making regular hospital visits and raising money for the Eli Manning Pediatrics Fund. Eli Manning and his wife, Abby, live in Hoboken, New Jersey. Archie Manning attended the University of Mississippi, where he was named an All-American quarterback and is the only Ole Miss player to have his number retired. In 1971, Archie was the second player chosen in the NFL draft, and during his 15-year career he set passing records with the New Orleans Saints and played in two Pro Bowls. Archie Manning and his wife, Olivia, reside in New Orleans. Jim Madsen has illustrated many books for children. He lives in Provo, Utah, with his wife and three children."