Courage to Dream: Tales of Hope in the Holocaust (Paperback) 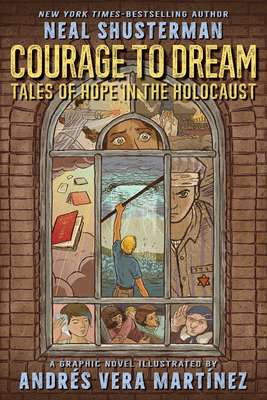 Courage to Dream: Tales of Hope in the Holocaust (Paperback)

Courage to Dream plunges readers into the darkest time of human history—the Holocaust. This graphic novel explores one of the greatest atrocities in modern memory, delving into the core of what it means to face the extinction of everything and everyone you hold dear.

This gripping, multifaceted tapestry is woven from Jewish folklore and cultural history. Five interlocking narratives explore one common story – the tradition of resistance and uplift. Internationally renowned author Neal Shusterman and illustrator Andrés Vera Martínez have created a masterwork that encourages the compassionate, bold reaching for a dream.

Andrés Vera Martínez is a cartoonist and illustrator. He is the co-author of the graphic memoir, Little White Duck: A Childhood in China. Andrés’ work has been recognized by The Society of Illustrators, American Illustration, 3x3, Junior Library Guild, Slate Cartoonist Studio, School Library Journal, Horn Book Magazine, NPR, and the New York Times. He currently lives in New England with his family. For more, find Andres at andresvera.com.
Neal Shusterman is the New York Times bestselling author of more than thirty award-winning books for children, teens, and adults, including the Unwind dystology, the Skinjacker trilogy, Downsiders, and Challenger Deep, which won the National Book Award. Scythe, the first book in his latest series, Arc of a Scythe, is a Michael L. Printz Honor Book. He also writes screenplays for motion pictures and television shows. Neal is the father of four, all of whom are talented writers and artists themselves. Visit Neal at StoryMan.com and Facebook.com/NealShusterman.

Praise for the Arc of a Scythe trilogy:

“No one does doom like Neal Shusterman.” —Kirkus Reviews (starred review)

“The palpable desperation that pervades the plot…feels true, giving it a chilling air of inevitability.” —Publishers Weekly (starred review)

Praise for the Unwind dystology:

"Gripping, brilliantly imagined futuristic thriller...The issues raised could not be more provocative--the sanctity of life, the meaning of being human--while the delivery could hardly be more engrossing or better aimed to teens."--Publishers Weekly, starred review