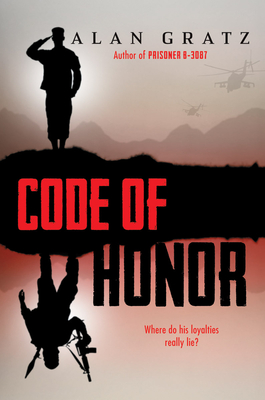 Kamran Smith has it all. He's the star of the football team, dates the most popular girl in school, and can't wait to join the Army like his big brother, Darius. Although Kamran's family hails from Iran, Kamran has always felt 100% American. Accepted. And then everything implodes. Darius is accused of being a terrorist. Kamran refuses to believe it, but the evidence is there -- Darius has been filmed making threats against his country, hinting at an upcoming deadly attack. Kamran's friends turn on him -- suddenly, in their eyes, he's a terrorist, too. Kamran knows it's up to him to clear his brother's name. In a race against time, Kamran must piece together a series of clues and codes that will lead him to Darius -- and the truth. But is it a truth Kamran is ready to face? And is he putting his own life at risk?

Alan Gratz is the New York Times bestselling author of several books for young readers, including Refugee; Projekt 1065, a Kirkus Reviews Best Book of 2016; Prisoner B-3087, a Junior Library Guild selection that was named to YALSA's 2014 Best Fiction for Young Adults list; and Code of Honor, a YALSA 2016 Quick Pick. Alan lives in North Carolina with his wife and daughter. Look for him online at alangratz.com.

Praise for Code of Honor:
"Readers will be swept up by both the intrigue and the rapid pacing... Kamran is a smart and sympathetic narrator, and readers will be happy to spend time with him in this action-packed thriller." -- Kirkus Reviews
"Exciting, at times ripped from the headlines, and scary, this cinematic work has layers of intrigue and danger in each scene... will appeal to a variety of readers and will raise questions about patriotism, loyalty, and trust... A winner." -- School Library Journal
"Vivid characters and timely topics, such as posttraumatic stress disorder, contribute to making Code of Honor a first-rate novel." -- VOYA
Praise for Prisoner B-3087:
A Junior Library Guild Selection
Golden Sower Award, 2014-2015 Winner Nebraska
Isinglass Teen Read Award, 2014-2015 Winner New Hampshire
Pennsylvania Young Readers' Choice Award, 2014-2015 Winner Pennsylvania
Junior Book Award, 2015-2016 Winner South Carolina
Grand Canyon Reader Award, 2015-2016 Winner Arizona
Truman Readers Award, 2015-2016 Winner Missouri
Readers Choice Awards, Winner 2015-2016 Virginia
Volunteer State Book Award Winner, 2015-2016 Tennessee
"A powerful story, well told." -- School Library Journal
"A bone-chilling tale not to be ignored." -- Kirkus Reviews
"[A] remarkable survival story." -- Booklist
"Gratz ably conveys . . . fatalism, yearning, and determination in the face of the unimaginable." -- Publishers Weekly
"Heartbreaking, gripping, raw, and emotional . . . storytelling at its finest." -- VOYA