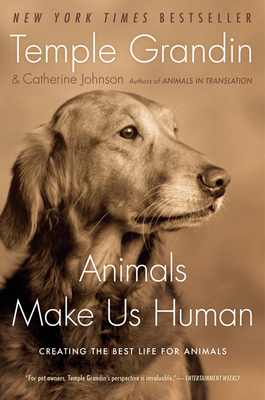 From beloved animal expert Temple Grandin, a fascinating exploration on how animals feel??—??essential reading for anyone who’s ever owned, cared for, or simply cared about an animal.

While it’s usually easy to pinpoint the cause of physical pain in animals, to know what’s causing them emotional distress is much harder. Drawing on the latest research and her own work, Grandin identifies the core emotional needs of animals. Then she explains how to fulfill them for dogs and cats, horses, farm animals, and zoo animals. Whether it’s how to make the healthiest environment for the dog you must leave alone most of the day, how to keep pigs from being bored, or how to know if the lion pacing in the zoo is miserable or just exercising, Grandin teaches us to challenge our assumptions about animal contentment and honor our bond with our fellow creatures.

TEMPLE GRANDIN is one of the world’s most accomplished and well-known adults with autism. She is a professor at Colorado State University and the New York Times bestselling author of several books, including The Autistic Brain, which have sold more than a million copies. Named one of Time's most influential people in 2010, the HBO movie based on her life, starring Claire Danes, received seven Emmy Awards.

CATHERINE JOHNSON, Ph.D., is a writer specializing in neuropsychiatry and the brain. She cowrote Animals in Translation and served as a trustee of the National Alliance for Autism Research for seven years. She lives with her husband and three sons—two of whom have autism—in New York.

Praise for Animals Make Us Human

"Part owner's manual and part business proposal, Animals Make Us Human argues that we can treat animals better if we consider the emotions that motivate them...For pet owners, her perspecitve is invaluable...Grade: A-" -- Entertainment Weekly

A well-written, down-to-earth look into the lives of lots of animals, including animals that make up part of our food chain. Grade: A" - Rocky Mountain News

Praise for Animals in Translation

“A master intermediary between humans and our fellow beasts . . . At once hilarious, fascinating, and just plain weird, Animals is one of those rare books that elicits a ‘wow’ on almost every page. A.”—Entertainment Weekly