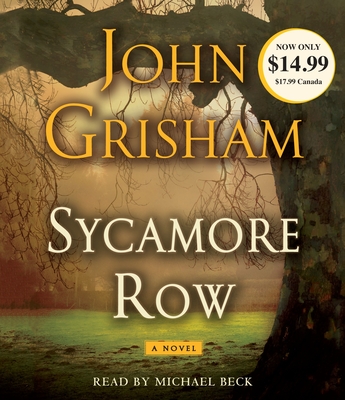 John Grisham takes you back to where it all began . . .

John Grisham's A Time to Kill is one of the most popular novels of our time. Now we return to that famous courthouse in Clanton as Jake Brigance once again finds himself embroiled in a fiercely controversial trial-a trial that will expose old racial tensions and force Ford County to confront its tortured history.

In Sycamore Row, John Grisham returns to the setting and the compelling characters that first established him as America's favorite storyteller. Here, in his most assured and thrilling novel yet, is a powerful testament to the fact that Grisham remains the master of the legal thriller, nearly twenty-five years after the publication of A Time to Kill.

John Grisham is the author of thirty novels, one work of nonfiction, a collection of stories, and six novels for young readers.

Michael Beck is an American actor known for his starring role in The Warriors and his role as Sonny Malone in Xanadu.

Praise for the novels of John Grisham