Healing SIBO: Fix the Real Cause of IBS, Bloating, and Weight Issues in 21 Days (Paperback) 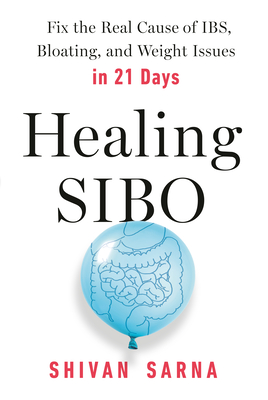 Healing SIBO: Fix the Real Cause of IBS, Bloating, and Weight Issues in 21 Days (Paperback)


Usually Arrives in Store in 1-5 Days
"By combining cutting-edge technical and medical information from health experts with her own expert advice and insights as a patient who has been there herself, Shivan Sarna has created an invaluable resource for the millions of people struggling with SIBO."
–Dr. Allison Siebecker

A guide to recognizing and overcoming SIBO, with a 21-day plan to stop feeling bloated, start losing weight, and fix your gut.

Millions of Americans suffer from bloating, constipation, diarrhea, food intolerances, and other gastrointestinal symptoms. Many spend years in pain before they figure out just what's going on with their gut. And while irritable bowel syndrome (IBS) is commonly diagnosed, SIBO, a disorder with basically all the same symptoms, is not. Some studies show eighty percent of people who suffer from IBS, mostly women, likely also have SIBO, an overlooked health issue that is difficult to diagnose.

So, what is SIBO? The acronym stands for Small Intestine Bacterial Overgrowth, a disorder in which bacteria that usually live in other parts of the gut start to proliferate and take up residence in the small intestine. This causes a whole confluence of symptoms, ranging from bloating and cramps, to uncontrollable weight gain or weight loss, to even malnutrition when the bacteria eat up vital nutrients from our food.

After decades of dealing with debilitating symptoms with no relief, Shivan Sarna's life finally changed when she was diagnosed with SIBO. As she eliminated her symptoms one by one through lifestyle changes and help from her physicians, she started to synthesize her personal experiences with Western and naturopathic medicine and dedicate herself to advocating for those suffering from SIBO, or those who think they could be.

Now, in this groundbreaking book, Shivan shares her step-by-step plan to treat, manage, and even heal SIBO, with information on what to eat and what to avoid, how to build a routine to manage your symptoms, and how to work with your doctor to find supplements and medications that promote healing. Shivan also includes a 21-day plan, which includes more than 40 recipes to put you on the path to recovery. Whether you're SIBO-diagnosed or SIBO-suspicious, this empowering guide will change the way you approach and think about your gut and overall health.
Shivan Sarna is the founder of the SIBO SOS Summits and creator behind the docuseries Digestion SOS: Rescue and Relief for IBS, SIBO, and Leaky Gut. She has spent the last twenty years on TV as a host for the Home Shopping Network. Shivan lives in Florida with her husband, her cat named Bell, four koi fish, and her adopted mom, Linda.
By combining cutting-edge technical and medical information from health experts with her own expert advice and insights as a patient who has been there herself, Shivan has created an invaluable resource for the millions of people struggling with SIBO. I highly recommend Healing SIBO. - Dr. Allison Siebecker

Shivan has done more to help SIBO patients understand and heal their condition than anyone. Her mission is to educate the public on the most cutting edge information about SIBO treatments and this book is no exception. This is your one-stop guide to everything you need to know about living with and treating SIBO. - Dr. Ilana Gurevich


Healing SIBO is an amazing contribution to those diagnosed with SIBO as well as those who are just beginning to address their gastrointestinal issues. Shivan Sarna has worked with the best doctors, nutritionists and other healthcare practitioners in the SIBO community for years and it shows in the wealth of information that she presents in this book. She offers practical advice and breaks down the intricacies of healing from SIBO to make it accessible to everyone. - Kristy Regan, MScN


Ms. Sarna has written an absolute gem of a book. As a sufferer of SIBO herself she includes tips and tricks for understanding SIBO and IBS from the inside out. She takes an incredible amount of information that can be overwhelming and turns it into an easily digestible and incredibly rich resource for not only the SIBO patient but also for physicians who need to understand what options their patients have for diagnostic testing and treatment of this disorder. Ms. Sarna has taken her access to interviewing all of the top clinicians and researchers in the SIBO landscape and has synthesized that information in a way that the reader can access all of the most comprehensive and uptodate ideas around testing, treatment and understanding of their health picture. This is a must-read. - Dr. Anne Hill


Shivan Sarna’s new book, Healing SIBO: Fix the Real Cause of IBS, Bloating, and Weight Issues in 21 Days, has a powerful dedication at it’s very beginning: “To anyone who has ever had a medical mystery.” Having spent over a decade as a Naturopathic Doctor treating medical mysteries, I say this book - a guidebook to overcoming SIBO - is long overdue. SIBO has been a medical mystery disrupting millions of lives around the world. In addition to a plan to eradicate SIBO, this book powerfully outlines the hurdles. Like so many chronic illnesses, one of the main obstacles is that it mirrors the symptoms of many other disorders, leaving it underdiagnosed and untreated. Make no mistake, the domino effect of SIBO is not just a digestive inconvenience or bloating, it is also often responsible for food allergies, as well as simultaneously causing weight gain AND malnutrition. In a world where Google floods us with more information than we could absorb in a lifetime (never mind discerning what is accurate and relevant to your own health journey), Shivan Sarna has broken down the causes, the condition, and most importantly, provided a step-by-step simple pathway back to health. Healing SIBO is a must-read for anyone navigating SIBO, digestive issues, or unexplained symptoms. - Dr. Christine Schaffner


Healing SIBO contains the practical steps a patient needs to take to get well. Shivan has interviewed and distilled the best practitioners in SIBO world to create a book that any IBS person should own. After reading this you'll end up knowing more about SIBO than 99% of doctors. Which is very important because healing from chronic conditions takes a multifactorial approach that Shivan lays out. If you think getting rid of SIBO is just about the right tests and killing protocols you're missing 50% of the getting well map. - Steven Wright of HealthyGut.com


Shivan has continually proven herself to be one of the most well connected and well investigators experts in the world of SIBO and gut health. She is always connecting with and learning from the brightest minds in the industry, and has done an exceptional job curating the information gathered into an easy to read, science forward, and effective plan for healing the gut. - Dr. Michael Ruscio, DNM, DC