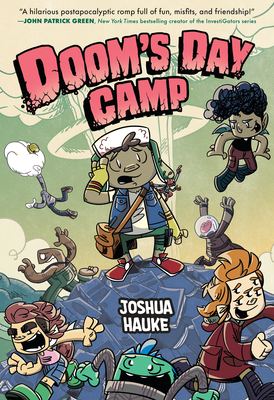 
On Our Shelves Now
“A hilarious postapocalyptic romp full of fun, misfits, and friendship! If you think your friends are oddballs, wait till you meet the kids at Doom’s Day Camp!” —John Patrick Green, New York Times bestselling creator of the InvestiGators series

The Last Kids on Earth meets Encanto in this funny and adventurous middle grade graphic novel set in a world where everyone has unusual abilities except for a boy named Doom . . . who just might have to save them all.

Doom Thorax is destined for greatness! Well, maybe…His dad is, after all, the fiercest apocalyptic warrior to ever walk what’s left of the earth. Unfortunately, in a world where the remaining humans (if you can still call them that) all have extraordinary abilities, Doom is painfully ordinary. In fact, the only thing even remotely special about him is that he is the one person in their whole pack who can read.

When his dad leads the adults off to battle a mysterious new threat, Doom gets left in charge of all the other kids from his camp. The only problem is he can barely take care of himself, let alone a group of weirdos like them. What’s he supposed to feed a boy made of mud? Why is the girl with telekinesis such a headache? And how can he stop his super strong little sister from turning everyone against him? Doom has ­ finally been given a chance to prove himself. But it may take a lot more than book smarts if he and the others are going to have any chance at surviving on their own.

Joshua Hauke was lucky enough to discover that he was a weirdo at a very young age. After breaking his drawing arm three times in a row, Joshua learned that he could teach almost any part of his body to pick up a pencil, including his opposite arm and his left earlobe. Eventually, he even trained his beard to help out! Joshua is the creator of the webcomic Tales of the Brothers Three, which is inspired by his own life growing up in the Midwest. He currently lives in Los Angeles with his wife and daughter.

You can follow him on Twitter @mortimerjmoose and Instagram @joshuahauke. To find out more, visit joshuahauke.com.
“A hilarious postapocalyptic romp full of fun, misfits, and friendship! If you think your friends are oddballs, wait till you meet the kids at Doom’s Day Camp!” —John Patrick Green, New York Times bestselling creator of the InvestiGators series

“Like an over-indulgent candy store owner, Joshua Hauke keeps the multicolor weirdness coming right up to the last page. And on top of that there’s a love of books and bookishness that warms my heart.” —Ben Hatke, New York Times bestselling creator of the Zita the Spacegirl and the Mighty Jack series

“Doom's Day Camp is a fantastic fun read that kids of all ages will enjoy!” —Dan Santat, Caldecott Medalist and New York Times bestselling creator of The Aquanaut and The Adventures of Beekle

“Imaginative, wacky, and a bit of a nail-biter, this tale giggles in the face of danger and promises an entertaining read.” —School Library Journal

“Hauke creates a vivid, cartoonish world with entertaining monsters and well developed characters in a story that relies on empathy and understanding. Hand this to fans of Ben Hatke's Mighty Jack series.” —Booklist