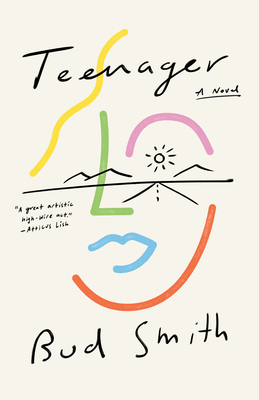 
On Our Shelves Now
AN NPR BEST BOOK OF THE YEAR • Two teenagers, in love and insane, journey across the United States in this Bonnie and Clyde–like adventure, pursuing a warped American dream, where Elvis is still king and the corn dog is the “backbone of this great country.”

“There is a typo on page 14. Other than that, this book is perfect.” —Bill Callahan

“He told her he was a one-woman man and she was it for him. Teal said that was good because he was it for her. It and It. Both of them were It.”

Kody Rawlee Green is stuck in juvie. Tella “Teal Cartwheels” Carticelli is packing her bags for Rome--on the orders of her parents, who want her as far from Kody as possible. But teenage love is too strong a force for the obstacles of reality. And the highway beckons.

Leaving their abusive pasts behind them in Jersey, Kody and Teal set off on a cross-country road trip equal parts self-destruction and self-discovery, making their way, one stolen car at a time, toward bigger, wider, bluer skies. Along the road, of course, there’s time to stop at Graceland, classic diners, a fairgrounds that smells of “pony shit and kettle corn," and time for run-ins with outsize personalities like the reincarnated Grand Canyon tour guide Dead Bob and the spurious Montana rancher Bill Gold. On their heels, all the while, is Teal’s brother, Neil Carticelli, who’s abandoned his post in the navy to rescue the sister he left behind. But does she really need saving?

These all too American tropes find new expression in Bud Smith’s own freewheeling prose—and in Rae Buleri’s original illustrations—filling Teenager with humor, poetry, and a joy that’s palpable in every unforgettable sentence.

"Teenager is electric. It is damaging and dangerous and stunning. This fast-moving novel will shock you on every page, sometimes once, and sometimes for sentences or paragraphs or pages at a time like a barrage of haymakers." —Nick Sweeney, Atticus Review

"A rollicking, hilarious story . . . A novel that you race through and don’t want to end. It’s fast and mean and over-the-top romantic and dark as fuck . . . A novel for now and a novel for all the ages." —Paula Bomer, Full Stop

"[A] fast-paced phantasmagoria of a novel . . . [Kody and Teal] embark on a road trip across the country, love each other hard and furiously, find and sow chaos, all the while vying for a kind of freedom that exists solely in fantasy." —Ilana Massad, NPR

"A beautiful, doomed adventure steeped in a lovely and vital escapism, crashing through the underbrush toward salvation . . . The novel [is] undeniably modern . . . Deftly blending media influences and literary genres in ecstatic, rhythmic prose that echoes quintessential American greats, Teenager’s influx of influences is audible, visible—you hear Allen Ginsberg in “Howl”-inspired repetitions, Louis L’Amour in the sprawling, exuberant action sequences, Quentin Tarantino in the decadent violence and off-kilter dialogue, a salute to [Hunter S.] Thompson in the expansive meditation on the elusive (nonexistent?) American Dream—but Smith’s outsize, cinematic prose is wholly his own. Teenager is about hope, trauma, self-reliance, the necessity of carving out a piece of the world for yourself—but above all else, it’s a testament to young love." —Mila Jaroniec, The Millions

"[Bud Smith] is a hell of a writer: honest and vulnerable and sincere . . . There is a poetry to even the most mundane descriptions within the book. A feeling that you’re in on a secret that no one else is privy to." —Patrick Trotti, JMWW

"At once a thrill ride—the writing is as exhilarating as the action is appalling—and a genuine, full-hearted tragedy." —George Ernsberger, Shawangunk Journal

"Collectively, we’ve been obsessed with the Bonnie and Clyde narrative for decades [and] Bud Smith blows all fiction that came before him out of the water, [expanding] these conventions to create complex, flawed characters that feel real to us. This is not just an exhilarating, addictive novel, it’s a study of genuine humanity . . . [Featuring] incredible illustrations [that capture] the childlike cruelty that rings through the text perfectly." —Shannon Wolf, Heavy Feather Review

"Not your average road trip novel . . . A romp through the crisscrossing American highways and equally twisted minds of two teenagers . . . Bud Smith manages to capture the innocence and idiocy of teenagerdom . . . [The book] has a shimmer, a sort of surreal gleam that allows it to rest just on the edge of reality." —Emilia Ferrante, The Michigan Daily

"A superb novel . . . Fascinated with the question of what makes us American, but smart enough not to have a reasonable answer." —Nicholas Rys, The Nervous Breakdown

"Hits that sweet-and-salty spot between reality and fantasy, truth and falsehood, ecstasy and heartbreak . . . What’s so magical about Bud’s work [is that] it inspires others to walk and talk in the poetry of their own." —Christina Drill, Chicago Review of Books

"Hilariously bizarre and fanciful . . . The absurd and darkly humorous experiences are the beauty of Teenager . . . This novel is the wayward fantasy that most adults have lost. Where we see danger, they see adventure. What we see as red flags, they see as quirkiness. Darkness does not exist for them once they are free of the adults in their lives. Only a whimsical sense of self-determination. We have felt this. Bud Smith has felt this. And now that he has written this nostalgic love letter to our youth, we can feel it again." —Mallory Smart, Vol. 1 Brooklyn

"The high volume of events, combined with Smith’s delightfully galvanic style, creates a sense of participation for the reader, a welcome involvement—even friendship—with Teenager’s young and troubled kids on the run . . . All with surreal and moving drawings by Rae Buleri." —Alexander Sammartino, The Millions

"Smith’s prose is exceptional . . . You’re able to follow along like one of your best friends is telling you a story . . . The juxtaposition between violence and tenderness in the book is stunning. Are they reckless? Yeah. Do they take things too far? Yeah. But I can’t look back on my own adolescent years without thinking about all of the crazy impulses I had. Of course I’d want to hit the road with the person I love, saying screw everyone else, we can have everything we want . . . By the end of it, I felt like I had witnessed the rebirth of something—some spirit of Americana that’s been missing, or maybe was always there but is now out in the open, rejuvenated and bright. Whatever it is, Bud Smith’s prose made the world around me feel ethereal for a brief moment in time." —Blake Levario, Washington Square Review

"Drawing on such symbols of Americana as Elvis Presley, Bonnie and Clyde, and Jack Kerouac’s road tripping, Teenager is the sort of offbeat love story that proves Bud Smith can sit comfortably beside Denis Johnson as a poet laureate of rundown carnivals and dimly lit bars." —Chicago Review of Books

"Read it on a plane, read it on the beach, and throw it into the ocean, and then buy another one. Read it to know where the American Dream has gone. This book is our new myth . . . Teenager is one of the few great books about teenagers because it is funny without condescension, sad without sentimentality, and has no moral at the end. It made me feel alive without lying to me . . . The whole thing rolls out like a beautiful song . . . Also, almost every chapter has a line illustration by Rae Buleri that would make an excellent tattoo." —Conor Hultman, The Local Voice (Mississippi)

"One hell of a coming-of-age story. Smith has perfectly captured what it’s like to be young, carefree, and making slightly stupid decisions along the way . . . You'll stay up reading in one binge." —Debutiful

“There is something raw and engaging about watching [Kody] do his best to try and prove himself against a futile position in life . . . We’re conditioned to expect stories to have a clear direction, and so it’s nice to break out of that, especially with something that is so real. Kody is constantly thinking the grass is going to be greener and is continually disappointed . . . The only thing [he] doesn’t seem to tire of is Tella. And that depiction of love is all we need. In the end, that is the point.” — Joseph Edwin Haeger, The Big Smoke

"A whirlwind journey through a mythic America . . . Smith has mixed violence with fable to create this modern-day tall tale about two teens who love each other and say to hell with everything else. Each small chapter is akin to a section from The Odyssey or Don Quixote, snapshots that could stand alone but merge together to create a greater story . . . A new American folktale with teeth." —Kirkus Reviews

"Evokes the surreal contrasts of the American landscape in smart, jittery prose. Smith makes this a trip worth taking." —Publishers Weekly

“Hard to put down.” —Booklist

"Teenager won't make you want to be young again, but you may be shocked at what it awakens in you, the feelings and memories of long-buried past selves. Bud Smith asks us to not only remember those past selves, but to handle them gently. A rare novel that manages to be both sharp-edged and deeply romantic, classic yet wholly fresh." —Jean Kyoung Frazier, author of Pizza Girl

“Teenager is a great artistic high-wire act and a gift to readers who still care about the timeless problem of young men and women finding their place together in this world—or not. Should Tella get in another stolen car with Kody and flee with him to the Montana of his imagination? Both quests are represented here, hers and his, Yin and Yang, and Smith tells it all with ecstatic wit and feeling and innocence. To have captured this duality on paper demanded more than wildness, more than heart—all of which Smith has to burn—but also will and skill and ingenuity.” —Atticus Lish, author of The War for Gloria

“From the Graceland mansion to an alpaca farm in Montana, from a chapel in the Grand Canyon to the ancient forests of California, this is a love story as epic and eccentric as America. In prose that crackles and sings off the page, Bud Smith has written a humorous and tender new classic.” —Mary South, author of You Will Never Be Forgotten

“Abused when not neglected, and with no patience for self-pity, Teenager’s Kody and Teal are the latest memorable additions to that venerable American tradition of They’re young, they’re in love, and they’ll shoot if they have to, lighting out for the west and freedom. Wildly romantic, blithely clueless and always headlong, they’re above all else passionately appreciative of the miracle of someone else having chosen, of all things, them, and everywhere they go they reveal, in all its doofy and intermittent heartlessness and lethality, the America that spawned them.” —Jim Shepard, author of Phase Six

“Bud Smith is a classic writer who taps into the absurd skillfully. His dry, deft, enthusiastic language guts without being sentimental. Teenager is a study on the gnawing, American desire for escape; the lengths we will go to elude boredom, find love, and feel connected. From Tennessee to Montana, I’ll follow Kody and Teal wherever they take me.” —Halle Hill, author of Good Women

"Written in sentences as spare and fine as line drawings, Teenager is a blood-soaked love story that is at once hopeless and hopeful, reckless yet redeeming. A ton of fun.” —Lee Clay Johnson, author of Nitro Mountain

"We could use more writers like Bud Smith. Teenager is a lovestruck, cross-country road-trip novel following a couple of ill-starred delinquents on the run from the olds; and though we have plenty of novels that tell that story, this is the only one we have from Bud Smith. And that’s good." —Jonny Diamond, Literary Hub