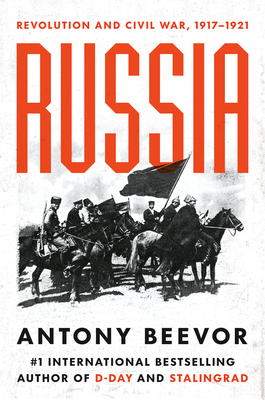 
On Our Shelves Now
“Riveting . . . There is a wealth of new information here that adds considerable texture and nuance to his story and helps to set Russia apart from previous works.”—The Wall Street Journal

An epic new account of the conflict that reshaped Eastern Europe and set the stage for the rest of the twentieth century.

Between 1917 and 1921 a devastating struggle took place in Russia following the collapse of the Tsarist empire. The doomed White alliance of moderate socialists and reactionary monarchists stood little chance against Trotsky’s Red Army and the single-minded Communist dictatorship under Lenin. In the savage civil war that followed, terror begat terror, which in turn led to ever greater cruelty with man’s inhumanity to man, woman and child. The struggle became a world war by proxy as Churchill deployed weaponry and troops from the British empire, while contingents from the United States, France, Italy, Japan, Poland, and Czechoslovakia played rival parts.

Using the most up to date scholarship and archival research, Antony Beevor assembles the complete picture in a gripping narrative that conveys the conflict through the eyes of everyone from the worker on the streets of Petrograd to the cavalry officer on the battlefield and the doctor in an improvised hospital.
Antony Beevor is the author of Crete: The Battle and the Resistance (Runciman Prize); Stalingrad (Samuel Johnson Prize, Wolfson Prize for History and Hawthornden Prize); Berlin: The Downfall; The Battle for Spain (Premio La Vanguardia); D-Day (Prix Henry Malherbe and the RUSI Westminster Medal); The Second World War; Ardennes 1944 (Prix Médicis shortlist); and Arnhem. A former chairman of the Society of Authors, he has received a number of honorary doctorates. He is also a visiting professor at the University of Kent and an Honorary Fellow of King’s College, London. He was knighted in 2017.

One of Barnes & Noble's Best History Books of 2022

“Riveting . . . There is a wealth of new information here that adds considerable texture and nuance to his story and helps to set Russia apart from previous works.”—The Wall Street Journal

"Russia makes compelling use of witness testimony including from Russian archives. . . Beevor hits his stride with the formation of the Volunteer Army and rising military opposition to the Bolsheviks. . . As an account of internecine rivalry the book has panoramic sweep."—Financial Times

"Beevor’s book reads like a novel. . . An excellent place to begin learning about the Soviet period."—Forbes

"[Russia is] welcome because most Westerners have paid little attention to the fratricidal fury of the Russian Civil War, finding it bewilderingly complicated."—The Atlantic

"[A] magisterial history . . . a richly detailed account of the momentous four years of Russian history between 1917 and 1921."—NY Journal of Books

"In this brilliant marshalling of a notoriously complex history, Antony Beevor opens up a magisterial canvas of terror and tragedy."—Colin Thubron, author of Shadow of the Silk Road and The Amur River: Between Russia and China

"Beevor has given us what may be his most brilliant book to date—a masterpiece of historical imagination, in which the tragedy and horror of this colossal struggle is recaptured, in its impact on everyday life as well as its military dimensions, as never before. This is a great book, whose depiction of savage inhumanity speaks powerfully to our present condition.’—John Gray, author of Straw Dogs

“A completely riveting account of how the Russian Revolution, which started with such high hopes and idealism, degenerated into a tangle of civil conflicts marked by hideous cruelty on all sides. Antony Beevor brings his great gifts for narrative, and his deep interest in the people who both make history and suffer it, to illuminate that crucial period whose consequences we are still living with today.” — Margaret MacMillan, author of War: How Conflict Shaped Us and The War That Ended Peace: The Road to 1914

"This is an unmerciful book, agonising, yet always irresistible."—The Times (UK)

"A masterpiece of history and a harrowing lesson for today. . . Antony Beevor’s grimly magnificent new book. . . is ground-breaking in its use of original evidence from many archives."—The Daily Telegraph

"What makes the new book so readable is its structure. . .  Beevor’s short chapters break up the action to ensure they are digestible while also pointing a clear path through the dark fog of this brutal war. . . This combination of clarity with vividness is Beevor’s defining strength as a historian."—The Sunday Times

"A mass of chilling contemporary testimony in a new history of the 1917-21 Russian experience . . . [Beevor] is winning plaudits around the world."—Bloomberg.com

"Beevor weaves his way through the enormous complexities of these years with intelligence, wit, and a talent for describing individuals and events. As one might expect he is in his element when describing battles, campaigns, and the down-to-earth realities of war. He conveys well the appalling savagery, casual violence and suffering brought on by the Civil War."—The Times Literary Supplement

"A wonderfully lucid writer who marshals the extensive material with great verve and understanding. . . Beevor has captured the tragedy in mesmerising detail."—The Observer