The Best Is Yet to Come: A Novel (Large Print / Paperback) 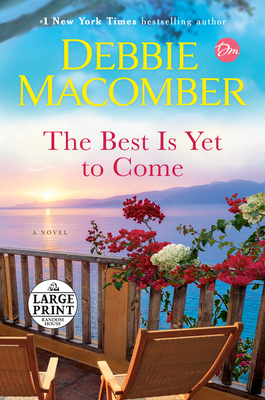 The Best Is Yet to Come: A Novel (Large Print / Paperback)


Usually Arrives in Store in 1-5 Days
NEW YORK TIMES BESTSELLER • When a woman alone in the world bravely chooses to open her heart, two lost souls have a new chance at belonging, in this intimate novel from #1 New York Times bestselling author Debbie Macomber.

A new beginning in charming Oceanside, Washington, is exactly what Hope Godwin needs after the death of her twin brother. There are plenty of distractions, like her cozy cottage with the slightly nosy landlords next door, and a brewing drama among her students at the local high school.

Even having settled quickly into the community, Hope still feels something is still missing. That is, until her landlords convince her to volunteer at their animal shelter. There she meets Shadow, a rescue dog that everyone has given up on. But true to her name, Hope believes he’s worth saving.

Like Shadow, shelter volunteer Cade Lincoln Jr. is suffering with injuries most can’t see. A wounded ex-marine, Cade identifies with Shadow, assuming they are both beyond help. Hope senses that what they each need is someone to believe in them, and she has a lot of love to give. As she gains Shadow’s trust, Hope notices Cade begins to open up as well. Finding the courage to be vulnerable again, Cade and Hope take steps toward a relationship, and Hope finally begins to feel at peace in her new home.

But Hope’s happiness is put to the test when Cade’s past conflicts resurface, and Hope becomes embroiled in the escalating situation at the high school. Love and compassion are supposed to heal all wounds, but are they enough to help Hope and Cade overcome the pain of their past and the obstacles in the way of a better future?
Debbie Macomber, the author of A Walk Along the Beach, Window on the Bay, Cottage by the Sea, Any Dream Will Do, If Not for You, and the Rose Harbor Inn series, is a leading voice in women's fiction. Thirteen of her novels have reached #1 on the New York Times bestseller list, and five of her beloved Christmas novels have been hit movies on the Hallmark Channel, including Mrs. Miracle and Mr. Miracle. Hallmark Channel also produced the original series Debbie Macomber's Cedar Cove, based on Macomber's Cedar Cove books. She is also the author of the cookbook Debbie Macomber's Table. There are more than 200 million copies of her books in print worldwide.
“The Best Is Yet to Come [is] a deeply moving, compassionately drawn contemporary romance by Debbie Macomber. . . . Memorable, well-rounded characters and a suspenseful subplot involving students at the local school round out an emotionally immersive story. Debbie Macomber is a master of depicting the nuances of small-town life and how romance can rally and recharge the human spirit with hope.”—Shelf Awareness

“Macomber’s latest is a wonderful inspirational read that has just enough romance as the characters heal their painful emotional wounds.”—Library Journal

“Macomber gracefully deals with the harsh realities of grief; it’s easy to empathize with her struggling protagonists, and though their relationship is realistically rocky, readers will have no trouble rooting for their happy ending. The result is a deeply moving contemporary.”—Publishers Weekly