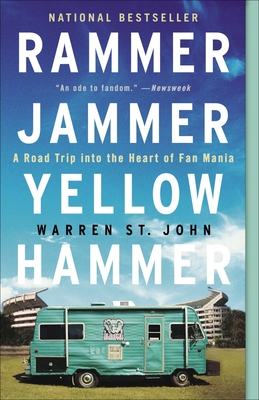 Voted the best sports book every by the Chronicle of Education. St. John has written a hilarious and intriguing account of college football and its rabid fans. For one season, he buys an RV and follows the Alabama Crimson Tide. There is a great chapter set in Oxford when they play the Rebs. Check it out.

What is it about sports that turns otherwise sane people into raving lunatics? Why does winning compel people to tear down goal posts, and losing, to drown themselves in bad keg beer? In short, why do fans care?

In search of answers, Warren St. John seeks out the roving community of RVers who follow the Alabama Crimson Tide from game to game. A movable feast of Weber grills and Igloo coolers, these are hard-core football fans who arrive on Wednesday for Saturday’s game: The Reeses, who skipped their own daughter’s wedding because it coincided with a Bama game; Ray Pradat, the Episcopal minister who watches the games on a television beside his altar while performing weddings; and John Ed, the wheeling and dealing ticket scalper whose access to good seats gives him power on par with the governor. In no time at all, St. John buys an RV (a $5,500 beater named The Hawg) and joins the caravan for a full football season, chronicling the world of the extreme fan and learning that in the shadow of the stadium, it can all begin to seem strangely normal.

Rammer Jammer Yellow Hammer is not only a hilarious travel story, but a cultural anthropology of fans that goes a long way toward demystifying the universal urge to take sides and to win.

Born in Birmingham, Alabama, Warren St. John is a reporter for the New York Times and has written for The New Yorker, the New York Observer, and Wired. He lives in New York.

“An ode to fandom.” —Newsweek

“St. John brings a singular empathy for his subjects. . . . These oversized personalities are rendered with irresistible zeal and light up the book like a stadium scoreboard.” —New York Times

"An unreconstructed fan of Alabama football, exiled in New York, Warren St. John goes home to join the Crimson Tide's most rabid supporters as they roll across the South. His four-mile-a-gallon odyssey through the sun, suds, and stink of tailgate culture is a fresh and funny take on the American road trip--and an affectionate yet unsentimental look at Southern life, from belles who chug beer and bray from the stands, to fundamentalists who forgive any sin except a losing season. Like his hero, Bear Bryant, St. John has crafted a winner." --Tony Horwitz, author of Confederates in the Attic

"What does it really mean to be a sports fan? For the millions of us who are, Warren St. John captures our passion with hilarity, absurdity and poignancy. He just gets our religion. And Rammer Jammer Yellow Hammer is a marvelous journey into the soul of sports in America. A great ride in the tradition of Hunter Thompson and an even better read." --H.G. "Buzz" Bissinger, author of Friday Night Lights

"A remarkable and funny book about obsession in America by a really fine writer." — Gay Talese

"Sports fandom is a phenomenon that has so far baffled the field of psychology.  The professionals haven't a clue.  They should read this book.  Warren St. John takes us to where the rubber meets the road." -- Tom Wolfe