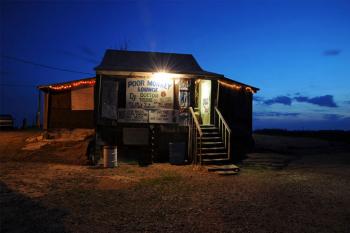 
Email or call for price.
Mississippi: State of Blues is the latest book from acclaimed photographer Ken Murphy, whose work was previously collected in the coffee table books Mississippi and My South Coast Home. The result of a three-year collaboration between Murphy and Oxford-based blues writer Scott Barretta, the book offers an assessment in both image and prose of the way blues exists and persists in the in 21st century. It offers a refreshingly new look at the world of Mississippi blues, capturing both traditional imagery and modern expressions of blues tourism via Murphy's characteristically highly detailed and panoramic full color images.

Ken Murphy was born in Frankfurt, Germany in 1954, but has spent most of his life in Bay St. Louis, his mother’s hometown. In 1971 Murphy, a 17-year-old high school dropout, joined the Army together with his brother Ray, and was assigned to Korea and then Germany. While serving there as a tank commander he lost his right index finger in a war game accident, and was reassigned to an Army photo shop. After leaving the service in 1979 he continued working in photography and in 1986 received his degree in Documentary &Editorial Photographic Illustration from the Rochester Institute of Technology. He returned to the Mississippi Gulf Coast to work as a commercial/art photographer, and in 2001 released his first book, My South Coast Home: Photographs of the Mississippi Gulf Coast. The book documented much of what was lost in Hurricane Katrina, which claimed Murphy’s home, his Bay St. Louis restaurant Dan B.’s, and the vast majority of his photographic archive. Murphy escaped from the storm with the negatives for My South Coast Home and his next photography book, Mississippi, which was published in 2007 and which Oxford’s Square Books called “the best (coffee table) book ever done about the state of Mississippi.” In 2006 he received the MAC Katrina Art Business Grant, and in 2007 a grant from the Andy Warhol Foundation for the Visual Arts.

Scott Barretta is a resident of Oxford. He’s the former editor of the Swedish blues magazine Jefferson and Living Blues, published by the Center For the Study of Southern Culture at the University of Mississippi,where he teaches courses including Anthropology of the Blues. He’s the host of the radio show Highway 61 on Mississippi Public Broadcasting, writes a blues column for the Clarion Ledger, conducts folklore research for the Mississippi Arts Commission, and has served as a researcher/writer for the Mississippi Blues Trail and the B.B. King Museum & Delta Interpretive Center. He blogs about Mississippi blues at highway61radio.com.