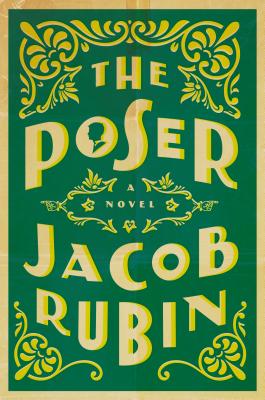 By Jacob Rubin
Special Order -- Email or Call for Availability

Named one of theHuffington Post's2015 Books We Can't Wait To Read

Smart and absorbing. . . . Echoes of Steven Millhauser and Tom McCarthy. . . . Probing, witty. The New York Times Book Review
A masterful debut . . . delivered with vaudeville verve. The Washington Post
Darkly funny. . . . A deeply sensitive exploration into matters of identity and authenticity. Associated Press
The Poseris smart and grand and funny, a wonderful fable. Mr. Rubin is a great hope for comic fiction in the 21st century. He's got the spirit and the ear. Sam Lipsyte
A hilarious and dazzling debut novel about a master impressionist at risk of losing his true self

All his life, Giovanni Bernini has possessed an uncanny gift: he can imitate anyone he meets. Honed by his mother at a young age, the talent catapults him from small-town obscurity to stardom.
As Giovanni describes it, No one's disguise is perfect. There is in every person, no matter how graceful, a seam, a thread curling out of them. . . . When pulled by the right hands, it will unravel the person entire. As his fame grows, Giovanni encounters a beautiful and enigmatic stage singer, Lucy Starlight the only person whose thread he cannot find and becomes increasingly trapped inside his many poses. Ultimately, he must assume the one identity he has never been able to master: his own.
In the vein of Jonathan Lethem's and Kevin Wilson's playful surrealism, Jacob Rubin's The Poser is the debut of a major literary voice, a masterfully written, deeply original comic novel, and the moving story of a man who must risk everything for the chance to save his life and know true love.