Tacky's Revolt: The Story of an Atlantic Slave War (Paperback) 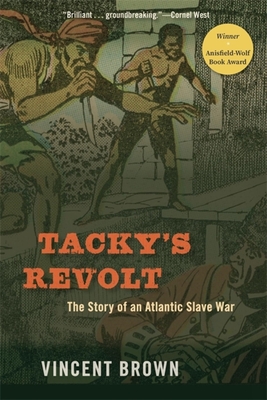 Tacky's Revolt: The Story of an Atlantic Slave War (Paperback)

"Brilliant...groundbreaking...Brown's profound analysis and revolutionary vision of the Age of Slave War--from the too-often overlooked Tacky's Revolt to the better-known Haitian Revolution--gives us an original view of the birth of modern freedom in the New World."
--Cornel West "Not only a story of the insurrection, but 'a martial geography of Atlantic slavery, ' vividly demonstrating how warfare shaped every aspect of bondage...Forty years after Tacky's defeat, new arrivals from Africa were still hearing about the daring rebels who upended the island."
--Harper's "A sobering read for contemporary audiences in countries engaged in forever wars...It is also a useful reminder that the distinction between victory and defeat, when it comes to insurgencies, is often fleeting: Tacky may have lost his battle, but the enslaved did eventually win the war."
--New Yorker In the second half of the eighteenth century, as European imperial conflicts extended their domain, warring African factions fed their captives to the transatlantic slave trade while masters struggled to keep their restive slaves under the yoke. In this contentious atmosphere, a movement of enslaved West Africans in Jamaica organized to throw off that yoke by violence. Their uprising--which became known as Tacky's Revolt--featured a style of fighting increasingly familiar today: scattered militias opposing great powers, with fighters hard to distinguish from noncombatants. Even after it was put down, the insurgency rumbled throughout the British Empire at a time when slavery seemed the dependable bedrock of its dominion. That certitude would never be the same, nor would the views of black lives, which came to inspire both more fear and more sympathy than before. Tracing the roots, routes, and reverberations of this event, Tacky's Revolt expands our understanding of the relationship between European, African, and American history as it speaks to our understanding of wars of terror today.