The Sound and the Fury: The Corrected Text with Faulkner's Appendix (Modern Library 100 Best Novels) (Hardcover) 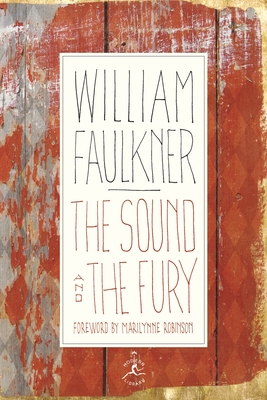 The Sound and the Fury: The Corrected Text with Faulkner's Appendix (Modern Library 100 Best Novels) (Hardcover)

From the Modern Library’s new set of beautifully repackaged hardcover classics by William Faulkner—also available are Snopes, As I Lay Dying, Light in August, Absalom, Absalom!, and Selected Short Stories

The Sound and the Fury, first published in 1929, is perhaps William Faulkner’s greatest book. It was immediately praised for its innovative narrative technique, and comparisons were made with Joyce and Dostoyevsky, but it did not receive popular acclaim until the late forties, shortly before Faulkner received the Nobel Prize for Literature.

The novel reveals the story of the disintegration of the Compson family, doomed inhabitants of Faulkner’s mythical Yoknapatawpha County, through the interior monologues of the idiot Benjy and his brothers, Quentin and Jason. Featuring a new Foreword by Marilynne Robinson, this edition follows the text corrected in 1984 by Faulkner expert Noel Polk and corresponds as closely as possible to the author’s original intentions. Included also is the Appendix that Faulkner wrote for The Portable Faulkner in 1946, which he called the “key to the whole book.”

WILLIAM FAULKNER was born in New Albany, Mississippi, on September 25, 1897. He published his first book, The Marble Faun (a collection of poems), in 1924, and his first novel, Soldier's Pay, in 1926. In 1949, having written such works as Absalom, Absalom!, As I Lay Dying, Light in August, and The Sound and the Fury, Faulkner was awarded the Nobel Prize for Literature. He also received the Pulitzer Prize for two other novels, A Fable (1954) and The Reivers (1962). From 1957 to 1958 he was Writer-in-Residence at the University of Virginia. He died on July 6, 1962, in Byhalia, Mississippi.
“I am in awe of Faulkner’s Benjy, James’s Maisie, Flaubert’s Emma, Melville’s Pip, Mary Shelley’s Frankenstein—each of us can extend the list.... I am interested in what prompts and makes possible this process of entering what one is estranged from.” —Toni Morrison

“No man ever put more of his heart and soul into the written word than did William Faulkner. If you want to know all you can about that heart and soul, the fiction where he put it is still right there.” —Eudora Welty