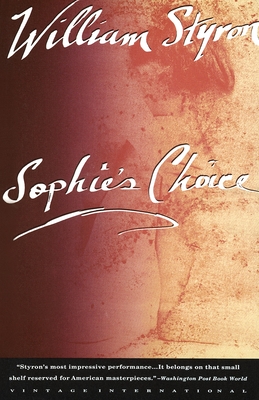 A powerful and heart-wrenching novel, set mainly in 1947 Brooklyn. Our narrator, Stingo, is an aspiring writer from Tidewater, VA who falls into step with the manic, charismatic Nathan and his girlfriend, Sophie. Stingo's summer with the couple will lead him to ruminate on the South, Nazi Germany, and the true nature of evil.

— Norma B.
Three stories are told: a young Southerner wants to become a writer; a turbulent love-hate affair between a brilliant Jew and a beautiful Polish woman; and of an awful wound in that woman's past--one that impels both Sophie and Nathan toward destruction.
William Styron (1925-2006), a native of the Virginia Tidewater, was a graduate of Duke University and a veteran of the U.S. Marine Corps. His books include Lie Down in Darkness, The Long March, Set This House on Fire, The Confessions of Nat Turner, Sophie’s Choice, This Quiet Dust, Darkness Visible, and A Tidewater Morning. He was awarded the Pulitzer Prize for Fiction, the Howells Medal, the American Book Award, the Légion d’Honneur, and the Witness to Justice Award from the Auschwitz Jewish Center Foundation. With his wife, the poet and activist Rose Styron, he lived for most of his adult life in Roxbury, Connecticut, and in Vineyard Haven, Massachusetts, where he is buried.