The Age of Homespun: Objects and Stories in the Creation of an American Myth (Paperback) 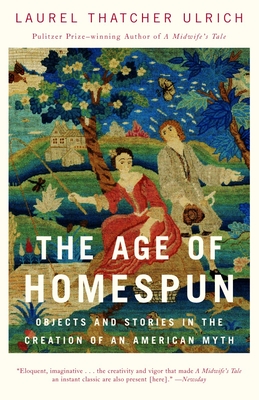 The Age of Homespun: Objects and Stories in the Creation of an American Myth (Paperback)


Backordered -- Email or Call for Availability
They began their existence as everyday objects, but in the hands of award-winning historian Laurel Thatcher Ulrich, fourteen domestic items from preindustrial America–ranging from a linen tablecloth to an unfinished sock–relinquish their stories and offer profound insights into our history.

In an age when even meals are rarely made from scratch, homespun easily acquires the glow of nostalgia. The objects Ulrich investigates unravel those simplified illusions, revealing important clues to the culture and people who made them. Ulrich uses an Indian basket to explore the uneasy coexistence of native and colonial Americans. A piece of silk embroidery reveals racial and class distinctions, and two old spinning wheels illuminate the connections between colonial cloth-making and war. Pulling these divergent threads together, Ulrich demonstrates how early Americans made, used, sold, and saved textiles in order to assert their identities, shape relationships, and create history.

LAUREL THATCHER ULRICH was born in Sugar City, Idaho. She holds degrees from the University of New Hampshire, University of Utah, and Simmons College. She is 300th Anniversary University Professor at Harvard University and past president of the American Historical Association. As a MacArthur Fellow, Ulrich worked on the PBS documentary based on her Pulitzer Prize-winning book A Midwife's Tale. Her work is also featured on an award-winning website called dohistory.org. She is immediate past president of the Mormon History Association. She lives in Cambridge, Massachusetts.

“Eloquent, imaginative. . . . The creativity and vigor that made A Midwife’s Tale an instant classic are also present [here].”--Newsday

"Remarkable . . . [Ulrich] performs like a virtuoso, conjuring up the small details she then weaves into her larger stories. . . . She dazzles." —Chicago Tribune

"Lively and captivating. . . . [Ulrich] quilts a new narrative, one that both probes and explodes the myths surrounding the idealized era of 'homespun.'" —Los Angeles Times