Dark Sun: The Making Of The Hydrogen Bomb (Paperback) 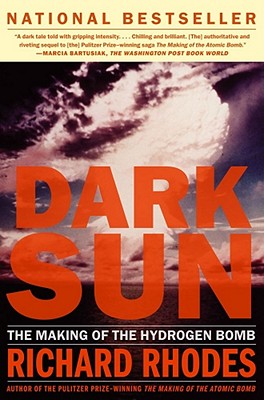 Dark Sun: The Making Of The Hydrogen Bomb (Paperback)


Usually Arrives in Store in 1-5 Days
Here, for the first time, in a brilliant, panoramic portrait by the Pulitzer Prize-winning author of The Making of the Atomic Bomb, is the definitive, often shocking story of the politics and the science behind the development of the hydrogen bomb and the birth of the Cold War.

Based on secret files in the United States and the former Soviet Union, this monumental work of history discloses how and why the United States decided to create the bomb that would dominate world politics for more than forty years.
Richard Rhodes is the author of numerous books and the winner of the Pulitzer Prize, the National Book Award, and the National Book Critics Circle Award. He graduated from Yale University and has received fellowships from the Ford Foundation, the National Endowment for the Arts, the John Simon Guggenheim Memorial Foundation, and the Alfred P. Sloan Foundation. Appearing as host and correspondent for documentaries on public television’s Frontline and American Experience series, he has also been a visiting scholar at Harvard and MIT and is an affiliate of the Center for International Security and Cooperation at Stanford University. Visit his website RichardRhodes.com.
"A dark tale told with gripping intensity....Chilling and brilliant. [The] authoritative and riveting sequel to [the] Pulitzer Prize-winning saga The Making of the Atomic Bomb."–Marcia Bartusiak, The Washington Post Book World

"Rhodes is a meticulous scholar, yet his tale is as riveting as any suspense thriller, replete with fascinating and bizarre characters, exotic locales, and a cliff-hanging plot. And all of it is true."–Paul Preuss, San Jose Mercury News

"A book of formidable range...draws on a vast array of sources, melding previous scholarship with an abundance of fresh material....Rhodes writes with a sharp eye for anecdote, character and political context....The result is a brilliantly rich and vivid account of the Cold War."–Daniel J. Kevles, The New York Times Book Review

"This most rewarding book is unique in the grim grandeur of its scope, the richness and originality of its content, and its deep and humane understanding."–Loma Arnold, Nature

"[Dark Sun] demonstrates the same ambition; literary skill; unrelenting research; talent for portraiture; understanding of the links between science, war and politics; willingness to stand up to large historical questions; and sound judgment that distinguished Richard Rhodes's 1988 book, The Making of the Atomic Bomb. But this is the more important volume, not only because of its influence on the way we think about a half-century of world history, but because the hydrogen bomb continues to cast a shadow on the world today."–Michael Beschloss, Los Angeles Times