No Heroes: A Memoir of Coming Home (Paperback) 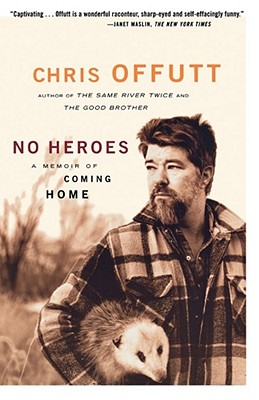 No Heroes: A Memoir of Coming Home (Paperback)


On Our Shelves Now
In his fortieth year, Chris Offutt returns to his alma mater, Morehead State University, the only four-year school in the Kentucky hills. He envisions leading the modest life of a teacher and father. Yet present-day reality collides painfully with memory, leaving Offutt in the midst of an adventure he never imagined: the search for a home that no longer exists.
Interwoven with this bittersweet homecoming tale are the wartime stories of Offutt's parents-in-law, Arthur and Irene. An unlikely friendship develops between the eighty-year-old Polish Jew and the forty-year-old Kentucky hillbilly as Arthur and Offutt share comfort in exile, reliving the past at a distance. With masterful prose, Offutt combines these disparate accounts to create No Heroes, a profound meditation on family, home, the Holocaust, and history.
Chris Offutt is an award-winning author and screenwriter. He worked on the HBO drama True Blood and the Showtime series Weeds. His books include Kentucky Straight, The Same River Twice, The Good Brother, Out of the Woods, and No Heroes: A Memoir of Coming Home. His work has appeared in The Best American Essays, The Best American Short Stories, and many other anthologies. He lives near Oxford, Mississippi.
Janet Maslin The New York Times Captivating...Offutt is a wonderful raconteur, sharp-eyed and self-effacingly funny.

Chicago Tribune Offutt...is a shot of Kentucky bourbon, a writer whose distillations of life are spare and pure and breathtaking.

The Seattle Times Offutt's gift to readers is substantial.