Democracy for Realists: Why Elections Do Not Produce Responsive Government (Princeton Studies in Political Behavior #4) (Paperback) 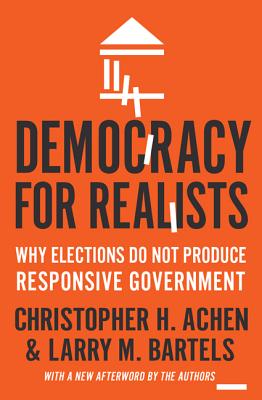 Democracy for Realists: Why Elections Do Not Produce Responsive Government (Princeton Studies in Political Behavior #4) (Paperback)

This is book number 4 in the Princeton Studies in Political Behavior series.

If you're looking for some understanding of why the U.S. government "works" the way it does, check out this book. It has nothing to do with the recent election nor politicians in general, but it proves (yes, proves) that all politics is identity politics. Voters, even the well-informed, don't vote on issues—they vote based on identity. It's an academic text, heavy on the footnotes so it's easy to get bogged down, but it's worth reading at least the first several chapter and conclusion. The authors don't advocate for some alternative form of government, rather they show that our current understanding of democracy is flawed. It's provocative, no doubt, but it's a must read for any civic-minded person, whether you're liberal, conservative, or something else.

Democracy for Realists assails the romantic folk-theory at the heart of contemporary thinking about democratic politics and government, and offers a provocative alternative view grounded in the actual human nature of democratic citizens. Christopher Achen and Larry Bartels deploy a wealth of social-scientific evidence, including ingenious original analyses of topics ranging from abortion politics and budget deficits to the Great Depression and shark attacks, to show that the familiar ideal of thoughtful citizens steering the ship of state from the voting booth is fundamentally misguided. They demonstrate that voters--even those who are well informed and politically engaged--mostly choose parties and candidates on the basis of social identities and partisan loyalties, not political issues. They also show that voters adjust their policy views and even their perceptions of basic matters of fact to match those loyalties. When parties are roughly evenly matched, elections often turn on irrelevant or misleading considerations such as economic spurts or downturns beyond the incumbents' control; the outcomes are essentially random. Thus, voters do not control the course of public policy, even indirectly. Achen and Bartels argue that democratic theory needs to be founded on identity groups and political parties, not on the preferences of individual voters. Now with new analysis of the 2016 elections, Democracy for Realists provides a powerful challenge to conventional thinking, pointing the way toward a fundamentally different understanding of the realities and potential of democratic government.
Christopher H. Achen is the Roger Williams Straus Professor of Social Sciences and professor of politics at Princeton University. His books include The European Union Decides. Larry M. Bartels holds the May Werthan Shayne Chair of Public Policy and Social Science at Vanderbilt University. His books include Unequal Democracy: The Political Economy of the New Gilded Age (Princeton).