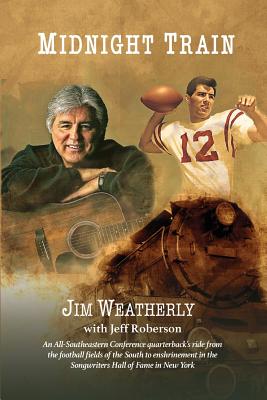 By Jim Weatherly (Memoir by), Jeff Roberson
$22.00
On Our Shelves Now

From the college football stadiums of the South to enshrinement in the Songwriters Hall of Fame in New York-- I'm Jim Weatherly and this is my story, an uplifting story of perseverance and my discovery of my own self-worth. Sometimes I can't believe it happened to me.

I began writing songs as a boy in a small town in Mississippi during the first decade of rock and roll in the 1950s, a path that would eventually lead to my being inducted into five different music halls of fame

As I continued to write songs during my youth, I was also excelling in sports, quarterbacking my high school football team to conference championships and statewide recognition.

I had a rock and roll band throughout my high school days and I was the lead singer for the group. Music and sports have always been my two greatest passions.

After high school, I became a scholarship football player at the University of Mississippi in Oxford, just half an hour's drive from my hometown of Pontotoc. I continued to play music during my college years at Ole Miss with my rock and roll band. I would perform with my group after football season and in the spring and summer, and we became one of the more popular bands in Mississippi and the surrounding states.

As a college sophomore in 1962, I was the backup quarterback on the only unbeaten and untied team in Ole Miss history. The Rebels were Southeastern Conference champions, national champions and won the Sugar Bowl against Arkansas in New Orleans that season.

It was during the 1962 football season that the University of Mississippi became a battleground of the civil rights movement with much turmoil surrounding the admission of the first black student, James Meredith. On September 29, 1962, a riot ensued to prevent the admission of Meredith. There were multiple injuries and two deaths that night.

After college, my band, the Gordian Knot, traveled to Los Angeles to look for a record deal. When that didn't pan out the band split up and I was on my own. I kept searching and searching for someone who liked my songs enough to give me a publishing deal.

Gladys Knight and the Pips were the musical key to my success. "Neither One of Us," "Midnight Train to Georgia," and "You're the Best Thing That Ever Happened to Me" were all chart-toppers for the group. The first two of those were Grammy winners.