The New Americans?: Immigration, Protest, and the Politics of Latino Identity (Hardcover) 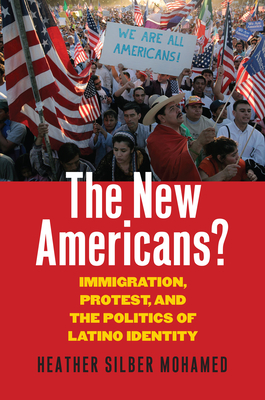 The New Americans?: Immigration, Protest, and the Politics of Latino Identity (Hardcover)


Email or call for price.
In 2006, millions of Latinos mobilized in opposition to H.R. 4437, an immigration proposal pending before the US Congress. In her new book, Heather Silber Mohamed suggests that these unprecedented protests marked a turning point for the Latino population--a point that is even more salient ten years later as the issue of immigration roils the politics of the 2016 presidential election. In The New Americans? Silber Mohamed explores the complexities of the Latino community, particularly as it is united and divided by the increasingly pressing questions of immigration. The largest minority group in the United States, Latinos are also one of the most diverse. The New Americans? focuses on the three largest national origin groups--Mexicans, Puerto Ricans, and Cubans--as well as two rapidly growing subgroups, Salvadorans and Dominicans, charting similarities and differences defined by country of origin, gender, tenure in the country, and language. Taking advantage of a unique natural experiment, Silber Mohamed's study also shows how the messages advanced during the 2006 protests led group members to raise immigration rights to the level of traditional concerns about economics and education and think differently about what it means to be American--and, furthermore, to think more distinctly of themselves as American. A concise discussion of major developments in US immigration policy over the last fifty years, The New Americans? explores the varied historical experiences of the different Latino national origin groups. It also traces the evolving role of Latino social movements as a vehicle for political incorporation over the last century. In its in-depth analysis of the diversity of the Latino population, particularly in response to the politics of immigration, the book illuminates questions at the heart of American political culture: specifically, what does it mean to "become" American?