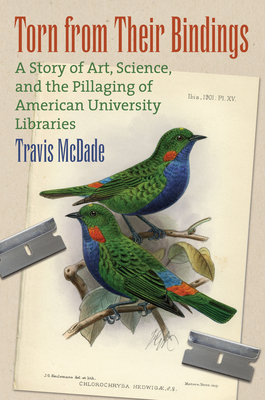 In 1980, an antique print dealer was going broke from competition and lack of supply. Then he discovered all the high-quality antique prints he could ever want--for free--on the shelves of American university libraries. Torn from Their Bindings tells the story of Robert Kindred's brazen theft of irreplaceable antique illustrations and maps from academic libraries across the country--a crime spree that left the irredeemable wreck of countless rare books in its wake. Travis McDade's account of Kindred's pillaging and the paper trail that led to his capture unfolds with the drama of a true crime page-turner--whose pages are replete with the particulars of archival treasures, library science, print preservation, and the history bound up in the cultural heritage plundered by Kindred. Along the way we observe the nature and methods of the book thief, defacer of priceless volumes and purveyor of purloined pages, and acquire a wealth of knowledge about the antique prints he favored. Told by an author devoted to the preservation of books, the story is propelled by an informed curiosity and just outrage from its suspenseful opening to its ironic conclusion--the ultimate fate of Kindred's spoils.