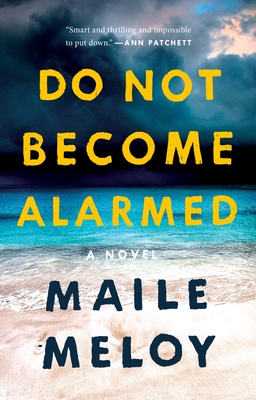 Looking to escape the pressures of the holiday season at home in LA, type-A Liv and her impulsive cousin Nora opt for a high luxury cruise with their husbands and young children.  What begins as a dream getaway becomes a nightmare when the kids go missing during an unplanned excursion offshore.  Paced like a thriller but every bit as character-driven and insightful as Meloy's earlier work, this is a beach read you won't feel guilty reading.  Enjoy with your toes in the sand and your heart in your throat.

“All parents have had those moments when something happens and you think, 'This is it. The moment my life changes.' This is the story of two families that face the unimaginable: they lose their children in a foreign country. The tale alternates between characters, with each fully realized and fully drawn. Maile Meloy explores what happens to each family: the relationship between the wives, who are cousins and have been close since childhood, and between the children who are missing. The writing is incredible, and the story is such that you can't put it down. A satisfying read that makes you wonder about how you would react in the same situation.”
— Kym Havens (E), An Unlikely Story, Plainville, MA

The moving and suspenseful new novel that Ann Patchett calls "smart and thrilling and impossible to put down... the book that every reader longs for."

The sun is shining, the sea is blue, the children have disappeared.

When Liv and Nora decide to take their husbands and children on a holiday cruise, everyone is thrilled. The adults are lulled by the ship’s comfort and ease. The four children—ages six to eleven—love the nonstop buffet and their newfound independence. But when they all go ashore for an adventure in Central America, a series of minor misfortunes and miscalculations leads the families farther from the safety of the ship. One minute the children are there, and the next they’re gone.

The disintegration of the world the families knew—told from the perspectives of both the adults and the children—is both riveting and revealing. The parents, accustomed to security and control, turn on each other and blame themselves, while the seemingly helpless children discover resources they never knew they possessed.

Do Not Become Alarmed is a story about the protective force of innocence and the limits of parental power, and an insightful look at privileged illusions of safety. Celebrated for her spare and moving fiction, Maile Meloy has written a gripping novel about how quickly what we count on can fall away, and the way a crisis shifts our perceptions of what matters most.

Maile Meloy is the author of the novels Liars and Saints and A Family Daughter, the short-story collections Half in Love and Both Ways Is the Only Way I Want It (named one of the 10 Best Books of 2009 by The New York Times Book Review), and a bestselling middle-grade trilogy. Her fiction has won the Paris Review's Aga Khan Prize for Fiction, the PEN/Malamud Award, and the Rosenthal Award from the American Academy of Arts and Letters. The recipient of a Guggenheim Fellowship, Meloy was shortlisted for the UK's Orange Prize and chosen as one of Granta's Best Young American Novelists.

“A very smart work of literary fiction… Meloy is such a deft writer that she keeps the adventure plot whizzing along even as she deepens our sense of the characters and the unfamiliar culture they have to navigate.” —Fresh Air, NPR

“Meloy is a subtle and sophisticated writer…Meloy pokes around in some profound subject matter…[her] portrait of well-meaning but still ugly Americans resonates.” —New York Times

“[Do Not Become Alarmed has] characters that are fully rendered and original, and writing that is beautifully spare and understated...while feeding us high drama.” —Los Angeles Review of Books

“[Meloy delivers] a wild, propulsive plot with tight prose and a constant current of suspense. It’s a thrilling novel, well constructed and hard to put down, a sharp reminder that the tide can take us anywhere, even when the water looks fine.” —Los Angeles Times

“[For summer reading] I’ll want a book that’s thrilling and artful, a true page-turner that will leave me feeling smart, so I’ll read Maile Meloy’s Do Not Become Alarmed.” —Ann Patchett in The Washington Post

“Meloy reels you into the story with her cool and fluid prose.” —The Christian Science Monitor

“Our advice: Don’t read Maile Meloy’s new adrenaline-driven thriller of class, race, and disappeared children after dark… Do Not Become Alarmed will keep you up all night, compelled by the book’s twisty plot and seductive, tightly wound suspense.” —Elle

“If there is one must-read book this summer, this is it.” —Real Simple

“Seen on pool loungers and beach towels from Nantucket to Santa Monica since the hardcover's debut in June, this thriller has become the page-turner of summer 2017.” —Forbes

“A taut, nervy thriller…Meloy has a keenly intuitive ear for family dynamics, first-world privilege, and all the ways that human nature can adapt to the unthinkable.” —Entertainment Weekly

“A marital reboot becomes a zip line to disaster in Maile Meloy’s holiday cruise-set thriller Do Not Become Alarmed, in which the children’s moral complexity outstrips that of their parents.” —Vogue

"Seen on pool loungers and beach towels since June, this thriller has become the page-turner of summer 2017." –Forbes

“Meloy, whose short stories were the basis of last year’s indie film Certain Women, writes a tense book in her signature sparing prose, and may have the book of the summer on her hands.”  —Conde Nast Traveler

“The tension will keep your heart racing with every page, as you become increasingly invested in the uncertain fate of each narrator.” —InStyle

“Glides along with a clarity that’s almost uncanny… readers of Do Not Become Alarmed get Meloy’s warmth and her even-tempered, protean imagination. Her view of human nature is almost Olympian in its refusal to take sides, in the consideration it affords to characters who would be mere bit players in a more conventional work. This novel is a bait and switch in the best possible sense. It promises readers easy-to-identify-with protagonists in a pair of mothers going through a parent’s worst nightmare. Then it presents them with so much more, a richer, broader palette of people to believe in and to understand.” —Slate

“'Page-turner' would be an understatement.” —Travel & Leisure

“This book is smarter than your average thriller.” —Fodor's

“Nothing pairs better with summer than a suspense that will keep you guessing (especially when it involves a cruise ship). The pulse-inducing unputdownable tale about the disappearance of four children on a family cruise, Do Not Become Alarmed is a powerful suspense that will leave readers asking themselves if family truly keeps us safe.” —Redbook

“This is one of those can’t-stop-turning-the-pages novels, which quickly reveals itself to be something more than a page-turner… [Meloy] writes with breathless tension yet lets her characters breathe; you believe these children and their desperate parents, and find yourself utterly entrenched in their fate.” —Seattle Times

“An original, expansive story that is memorable and vibrant…Throughout all of this propulsive action, Meloy’s ability to write about children and teenagers shines on the page. Their authentic dialogue and observations produce illuminated pockets of insights and innocence amid the escalating chaos.” —San Francisco Chronicle

“[An] intelligent thriller [with] a dramatic high-stakes plot.” —Newsday

“Ambitious…the deft plotting of this literary thriller unfolds like a journey through a maze in the dark.” –Portland Press Herald

"[A] well-written, suspenseful story… that makes for an irresistible summer read.” —Deseret News

"In Do Not Become Alarmed, Meloy has harnessed [her] gift for writing from diverse perspectives tenderly and intimately... this novel is a moral reckoning for our time, our culture, and our Cali-king-sized American dream." —Southeast Review

“Do Not Become Alarmed is not only ripe with tension, it’s also a terrific character study.” —Myrtle Beach Online

"[A] relentless new thriller...[Meloy has a] talent for crafting high-tension fiction that compels readers to turn the page." —Paste Magazine

“This is a book you won't be able to resist finishing in one sitting.” —Bustle

“Thrillers are having a moment right now, and Do Not Become Alarmed is at the top of our list... We didn’t know it was possible to be so moved and feel such intense suspense at the same time.” —HelloGiggles

“For thriller fans, the novel by Maile Meloy is the perfect summer pick…so realistic and gripping.” —Catapult

“[A] tale that will have you reading all night long...Meloy ratchets up the suspense until you’ll beg her to tell you what happens. She does, at the end of the book. Don’t skip ahead. You’ll be sorry if you do.” –20somethingreads

“A highly anticipated new book…Though it’s a thriller, it also addresses race, privilege, the uncertainty modern parents feel in raising the ‘perfect’ child, and what it matters most in life.” –NerdHQ

“The plot unfolds with terrifying realism… This writer can apparently do it all—New Yorker stories, children's books, award-winning literary novels, and now, a tautly plotted and culturally savvy emotional thriller. Do not start this book after dinner or you will almost certainly be up all night.” —Kirkus Reviews, starred review

“Ominous, addictive… In crafting this high-stakes page-turner, Meloy excels as a master of suspense.” —Publishers Weekly

“It's Meloy's razor-sharp execution that makes the book unforgettable. Spellbinding, terrifying and keenly observed, this one checks all our boxes for a can't-put-it-down, addictive read.” –BookPage

“[A] propulsive drama…infusing literary fiction with criminality and terror in a mode similar to that of Ann Patchett and Hannah Tinti, Meloy compounds the suspense in this gripping and incisive tale by orchestrating a profoundly wrenching shift in perspective, and morality, as well-meaning tourists face the dark realities of a complex place they viewed merely as a playground. Meloy’s commanding, heart-revving, and thought-provoking novel has enormous power and appeal.” —Booklist, starred review

“Meloy’s writing is literary but also page-turnery (my highest compliment), and Do Not Become Alarmed, about a vacation gone awry, promises to be both.” –Parnassus Musing

"Gripping...[Do Not Become Alarmed] is one of those books that you will stay up late to read." –Emma Straub, author of Modern Lovers and The Vacationers on PBS NewsHour

"This is the book that every reader longs for: smart and thrilling and impossible to put down. Read it once at breakneck speed to find out what happens next, and then read it slowly to marvel at the perfect prose and the masterwork of a plot. It is an alarmingly good novel." —Ann Patchett, author of Commonwealth, State of Wonder, and Bel Canto

"Here is that perfect combination of a luminous writer and a big, page-turning story. This hugely suspenseful novel will speak to anyone who has ever felt responsible for keeping a loved one safe, whether it was a child, a partner, a parent, or a friend. Meloy's characters—the adults and the children—feel to me like real, living people I'll never forget." —Helen Fielding, author of Bridget Jones's Diary