Lindbergh: The Tale of a Flying Mouse (Mouse Adventures) (Hardcover) 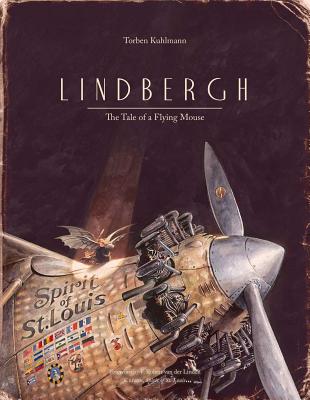 Lindbergh: The Tale of a Flying Mouse (Mouse Adventures) (Hardcover)


On Our Shelves Now
One small step for a mouse; one giant leap for aviation.

These are dark times . . . for a small mouse. A new invention—the mechanical mousetrap—has caused all the mice but one to flee to America, the land of the free. But with cats guarding the steamships, trans-Atlantic crossings are no longer safe. In the bleakest of places . . . the one remaining mouse has a brilliant idea. He must learn to fly!

Debut illustrator Torben Kuhlmann’s inventive tale and stunning illustrations will capture the imagination of readers—young and old—with the death-defying feats of this courageous young mouse.
Torben Kuhlmann studied illustration and communications design at the Hamburg University of Applied Science, with book illustration as his main subject. In June 2012 he finished his studies by writing and illustrating the children’s book Lindbergh—The Tale of a Flying Mouse. This was his first picture book, and within a very short time it became a best seller. It has now been translated into more than thirty languages. Further mouse adventures followed with Armstrong (2016), Edison (2018), and Einstein (2021), all of which have achieved cult status.
"The eye soars between aerial views and close-ups of old Hamburg in this beautifully rendered and well-thought-out picture book."
— The New York Times Book Review

The sheer beauty of this book is likely to overwhelm the senses. Its greatest asset is its ability to enthrall on contact...Breathtaking and simple all at once, it’s neither fish nor fowl: It’s flying mouse. Not much like anything you’ve ever encountered at all. Certainly it was worth its trip across the ocean to reach us.
— Elizabeth Bird

Kuhlman’s art is radiant...The art here takes the book to another level, creating a world where you believe that a mouse was the first to fly across the Atlantic. Beautiful and memorable, this picture book celebrates flight, ingenuity and perseverance.
— Waking Brain Cells

Sweeping full-color, full-page illustrations in a realistic style distinguish this amazing story, created as a tribute to brave individuals who lived to open up the sky.
— Midwest Book Review