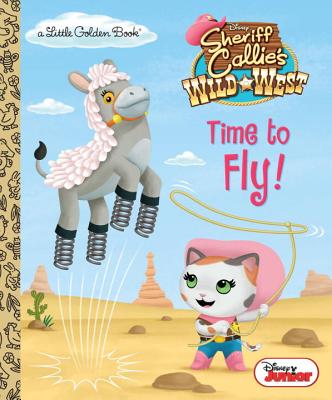 
Email or call for price.
Peck and Toby think Clementine the mule is turning into a bird. Now they want to teach her how to fly! Boys and girls ages 2 to 5 will laugh out loud at this Little Golden Book based on an episode of Disney Junior's Sheriff Callie's Wild West.
Andrea Posner-Sanchez has worked as an editor in children’s publishing for more than 20 years, and is a prolific author of books for children. Her books include Always a Princess (Disney Princess), Dog Days (The Secret Life of Pets), and Meet Maui (Disney Moana). She lives in New York City with her husband and their daughter.

Jason Fruchter has been an animator and illustrator for children's media for decades. He graduated from the Rhode Island School of Design with a BFA in 1992, and later moved to New York City to work for MTV Animation. In 2001, he cofounded A&J Studios, and has worked with Cartoon Network, Disney, Nickelodeon, and Sanrio. His books include Callie’s Cowgirl Twirl, Christmas Countdown, and Alphabet Magic. He lives in Seattle, Washington.