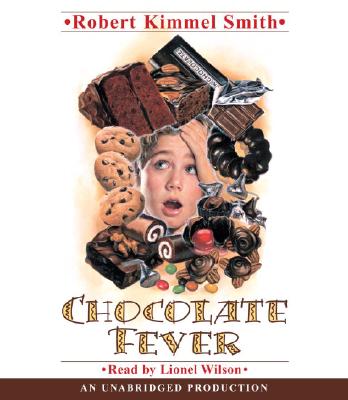 Henry Green eats so much chocolate he comes down with chocolate fever.

Robert Kimmel Smith is a writer, mostly known for his award-winning books for children. The War with Grandpa has received eleven State Reading Awards, including the William Allen White Children's Book Award and the California Young Reader Medal. His other works include Chocolate Fever, Jelly Belly, Mostly Michael, and The Squeaky Wheel. Smith is the recipient of the New York Library Association Knickerbocker Award for Juvenile Literature for his body of work. In addition to writing award-winning books for children, he has written short stories and plays, as well as the script for the television production of Chocolate Fever for CBS Story Break.

Lionel G. Wilson was an American voice actor. He lent his voice to television shows including The Aldrich Family, Tom Terrific (for which he provided the voice of all the characters), The Hector Heathcote Show, and Courage the Cowardly Dog. The books he narrated include Chicken Little, Chocolate Fever, Commander Toad in Space, Fox and His Friends, and Nate the Great. He died in 2003.

"It's all quite preposterous and lots of laughs, and so are the cartoon illustrations."--Publishers Weekly.