The Last Days of the Incas (Paperback) 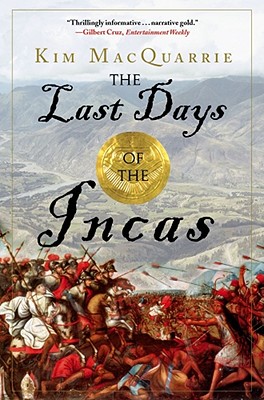 The Last Days of the Incas (Paperback)


Usually Arrives in Store in 1-5 Days
The epic story of the fall of the Inca Empire to Spanish conquistador Francisco Pizarro in the aftermath of a bloody civil war, and the recent discovery of the lost guerrilla capital of the Incas, Vilcabamba, by three American explorers.

In 1532, the fifty-four-year-old Spanish conquistador Francisco Pizarro led a force of 167 men, including his four brothers, to the shores of Peru. Unbeknownst to the Spaniards, the Inca rulers of Peru had just fought a bloody civil war in which the emperor Atahualpa had defeated his brother Huascar. Pizarro and his men soon clashed with Atahualpa and a huge force of Inca warriors at the Battle of Cajamarca. Despite being outnumbered by more than two hundred to one, the Spaniards prevailed—due largely to their horses, their steel armor and swords, and their tactic of surprise. They captured and imprisoned Atahualpa. Although the Inca emperor paid an enormous ransom in gold, the Spaniards executed him anyway. The following year, the Spaniards seized the Inca capital of Cuzco, completing their conquest of the largest native empire the New World has ever known. Peru was now a Spanish colony, and the conquistadors were wealthy beyond their wildest dreams.

But the Incas did not submit willingly. A young Inca emperor, the brother of Atahualpa, soon led a massive rebellion against the Spaniards, inflicting heavy casualties and nearly wiping out the conquerors. Eventually, however, Pizarro and his men forced the emperor to abandon the Andes and flee to the Amazon. There, he established a hidden capital, called Vilcabamba—only recently rediscovered by a trio of colorful American explorers. Although the Incas fought a deadly, thirty-six-year-long guerrilla war, the Spanish ultimately captured the last Inca emperor and vanquished the native resistance.
Kim MacQuarrie is a four-time Emmy Award–winning filmmaker and award-winning author who has lived and worked all over the world. Educated in the US and France, he lived for five years in Peru and spent some of that time living with a recently contacted tribe in the Amazon jungle, only 100 miles from Machu Picchu. He is the author of Life and Death in the Andes and The Last Days of the Incas, as well as three illustrated books about Peru. He currently divides his time between the US, Peru, and Thailand. Visit him at KimMacQuarrie.com.
"This is a wonderful book about one of the most epic struggles of history, a conquest that transformed a continent."
— -- Wade Davis, Anthropologist and Explorer-in-Residence National Geographic Society, and author of One River

"A colorful, superbly crafted historical narrative that masterfully demonstrates that when cultures collide, unforeseen and tragic consequences follow....also a memorable adventure story, revealing the modern Indiana Jones-type characters that unearthed, and continue to discover, lost parts of the Inca Empire. Last Days of the Incas is historical writing at its best."
— Broughton Coburn, author of Everest: Mountain Without Mercy

"The Last Days of the Incas surprises, delivers history, and reads like a great yarn. I've read yards of books on the Incas, but this one took me out of the classroom and into that long-lost world."
— Keith Bellows, Editor in Chief, National Geographic Traveler

"The story of the European conquest of the fascinating and fabulously rich empire of the Incas is one of history's most engaging and tragic episodes...Thanks to The Last Days of the Incas, Kim MacQuarrie's superbly written new treatment of the subject, it is now accessible to the much broader audience it deserves."
— Vincent Lee, author of Forgotten Vilcabamba

"In this thrilling informative work...MacQuarrie also manages to spin the oft-told story of the discovery of Machu Picchu into narrative gold."
— Entertainment Weekly