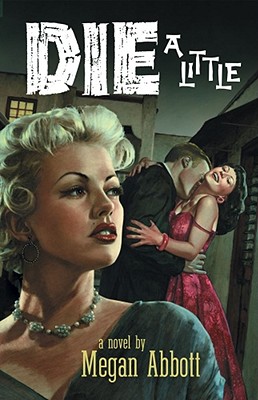 By the author of Dare Me and The End of Everything

Shadow-dodging through the glamorous world of 1950s Hollywood and its seedy flip side, Megan Abbott’s debut, Die a Little, is a gem of the darkest hue. This ingenious twist on a classic noir tale tells the story of Lora King, a schoolteacher, and her brother Bill, a junior investigator with the district attorney’s office. Lora’s comfortable, suburban life is jarringly disrupted when Bill falls in love with a mysterious young woman named Alice Steele, a Hollywood wardrobe assistant with a murky past.

Made sisters by marriage but not by choice, the bond between Lora and Alice is marred by envy and mistrust. Spurred on by inconsistencies in Alice’s personal history and possibly jealous of Alice’s hold on her brother, Lora finds herself lured into the dark alleys and mean streets of seamy Los Angeles. Assuming the role of amateur detective, she uncovers a shadowy world of drugs, prostitution, and ultimately, murder.

Lora's fascination with Alice’s "sins" increases in direct proportion to the escalation of her own relationship with Mike Standish, a charmingly amoral press agent who appears to know more about his old friend Alice than he reveals. The deeper Lora digs to uncover Alice’s secrets, the more her own life begins to resemble Alice’s sinister past—and present.

Steeped in atmospheric suspense and voyeuristic appeal, Die a Little shines as a dark star among Hollywood lights.

Megan Abbott is the author of three acclaimed novels, the Edgar Award–winning Queenpin, The Song Is You, and Die a Little. She lives in New York City.

"Finally, here is a modern noir that perfectly depicts Raymond Chandler's 1950s L.A. in all its seamy, sexy corruption. In a thrilling portrayal of rival femme fatales -- one a denizen of L.A.'s demi monde, the other seemingly immune to its dark pull -- Megan Abbott's Die a Little mixes a potent cocktail of jealousy, obsession, and danger."
-- Lisa Scottoline, author of Killer Smile