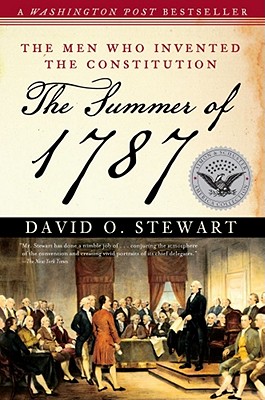 The Summer of 1787 takes us into the sweltering room in which the founding fathers struggled for four months to produce the Constitution: the flawed but enduring document that would define the nation—then and now.

George Washington presided, James Madison kept the notes, Benjamin Franklin offered wisdom and humor at crucial times. The Summer of 1787 traces the struggles within the Philadelphia Convention as the delegates hammered out the charter for the world’s first constitutional democracy. Relying on the words of the delegates themselves to explore the Convention’s sharp conflicts and hard bargaining, David O. Stewart lays out the passions and contradictions of the, often, painful process of writing the Constitution.

It was a desperate balancing act. Revolutionary principles required that the people have power, but could the people be trusted? Would a stronger central government leave room for the states? Would the small states accept a Congress in which seats were allotted according to population rather than to each sovereign state? And what of slavery? The supercharged debates over America’s original sin led to the most creative and most disappointing political deals of the Convention.

The room was crowded with colorful and passionate characters, some known—Alexander Hamilton, Gouverneur Morris, Edmund Randolph—and others largely forgotten. At different points during that sultry summer, more than half of the delegates threatened to walk out, and some actually did, but Washington’s quiet leadership and the delegates’ inspired compromises held the Convention together.

In a country continually arguing over the document’s original intent, it is fascinating to watch these powerful characters struggle toward consensus—often reluctantly—to write a flawed but living and breathing document that could evolve with the nation.

David O. Stewart is an award-winning author and the president of the Washington Independent Review of Books. He is the author of several acclaimed histories, including Madison’s Gift: Five Partnerships That Built America; The Summer of 1787: The Men Who Invented the Constitution; Impeached: The Trial of President Andrew Johnson and the Fight for Lincoln’s Legacy; and American Emperor: Aaron Burr’s Challenge to Jefferson’s America. Stewart’s first novel is The Lincoln Deception.

"Crafting the Constitution was one of the most amazing collaborations in human history. David O. Stewart's book is both a gripping narrative on how it was done and a useful guide to how we should regard that wonderful document today."
— Walter Isaacson, author of Benjamin Franklin and Einstein

"David O. Stewart's spirited The Summer of 1787 explores a time when brilliant men -- along with colleagues less acute but often louder -- hammered out the template for the United States of America. With indelible vignettes and anecdotes, Stewart reminds us why those four months in Philadelphia can still shake the world."
— A.J. Langguth, author of Union 1812: The Americans Who Fought the Second War of Independence

"David O. Stewart made clearer to me than ever the tensions and bargains that produced our Constitution at the Convention of 1787. Especially the bargain over slavery, with all its terrible, lasting consequences. It is an irresistible drama."
— Anthony Lewis, author of Gideon's Trumpet

"In this engaging story of the momentous but little-understood summer that gave us the Constitution, David O. Stewart deftly reminds us what a close-run thing America was -- and still is. Stewart's is an important work, written with insight and verve."
— Jon Meacham, author of American Gospel: God, the Founding Fathers, and the Making of a Nation

"At a time that feels to many like the twilight of the Republic, it is heartening to go back to the dawn and watch the authors of the Constitution struggle to create a democracy that would endure. In The Summer of 1787, David O. Stewart re-creates this moment with fidelity, great feeling, and insight. His book renews our appreciation of one of the masterpieces of Western civilization and reminds us, as Benjamin Franklin reminded his colleagues at the Constitutional Convention, that it was one thing to found a republic -- and quite another to keep it."
— Patricia O'Toole, author of When Trumpets Call: Theodore Roosevelt After the White House and The Five of Hearts: An Intimate Portrait of Henry Adams and His Friends

"The summer of 1787 may be more than two centuries in our past, but David O. Stewart makes it wonderfully vivid in this fresh and gripping account of America's constitutional birth pangs. Instead of periwigged demigods, Stewart introduces us to fifty-five white males, whose talent for compromise planted the seeds of representative democracy in their garden of privilege. This tale offers the perfect antidote to our own sound-bite and focus-group politics."
— Richard Norton Smith, author of Patriarch: George Washington and the New American Nation