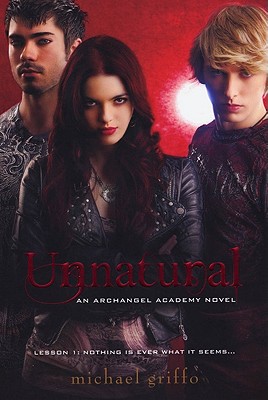 This is book number 1 in the Archangel Academy Novels series.

Lesson 1: Nothing is ever what it seems...

In the town of Eden in northwestern England stands the exclusive boarding school known as Archangel Academy. Ancient and imposing, it's a place filled with secrets. Just like its students...

For Michael Howard, being plucked from his Nebraska hometown and sent thousands of miles away is as close as he's ever come to a miracle. In Weeping Water, he felt trapped, alone. At Archangel Academy, Michael belongs. And in Ciaran, Penry, and especially Ciaran's enigmatic half-brother Ronan, Michael finds friendship deeper than he's ever known.

But Michael's only beginning to understand what makes the Academy so special. Ronan is a vampire-part of a hybrid clan who are outcasts even among other vampires. Within the Academy's confines exists a ruthless world of deadly rivalries and shifting alliances, of clandestine love and forbidden temptations. And soon Michael will confront the destiny that brought him here-and a danger more powerful than he can imagine...

Michael Griffo is an award-winning writer and one of six playwrights whose career will be tracked by WritersInsight.com until 2010. He is a graduate of New York University, has studied at Playwrights Horizons and Gotham Writers Workshop, and has written several screenplays.

Outside, the earth was wet.

The rain had finally stopped, but it had poured hard and long during the night, the sudden storm catching the land unprepared for such a prolonged onslaught. From Michael's bedroom window he could see the dirt road that led up to his house had flooded and the passageway that could lead him to another place, any place away from here, was broken, unusable. Today would not be the day he would be set free.

Ever since Michael was old enough to understand there was a world outside of his home, his school, his entire town, he had fantasized about leaving it all behind. Setting foot on the dirt path that began a few inches below his front steps and walking, walking, walking until the dirt road brought him somewhere else, somewhere that for him was better. He didn't know where that place was, he didn't know what it looked like; he only knew, he felt, that it existed.

Or was it all just foolish hope? Peering down from his second-floor window at the rain-drenched earth below, at the muddy river separating his home from everything else, he wondered if he was wrong. Was his dream of escape just that, a dream and nothing more? Would this be his view for all time? A harsh, unaccepting land that, despite living here for thirteen of his sixteen years, made him feel like an intruder. Leave He could hear the wind command, This place is not for you. But go where?

On the front lawn he saw a meadowlark, smaller than typical but still robust-looking, drink from the weather beaten birdbath that overflowed with fresh rainwater. Drinking, drinking, drinking as if its thirst could not be quenched. It stopped and surveyed the area, singing its familiar melodious tune, da-da-DAH-da, da-da-da, and pausing only when it caught Michael's stare. Switch places with me, Michael thought. Let me rest on the brink of another flight, and you sit here and wait.

And where would you go? the meadowlark asked. You know nothing of the world beyond this dirt.

Nothing now, but I'm willing to learn. The lark blinked, its yellow feathers bristling slightly, but I'm not willing to forget everything that I know. Da-da-DAHda, da-da-da.

The meadowlark was walking along the ledge of the birdbath, interrupting the stagnant water this time with its feet instead of its b.

Michael Griffo is an award-winning writer and a graduate of New York University. He has studied at Playwrights Horizons and Gotham Writers Workshop, and has written several screenplays.