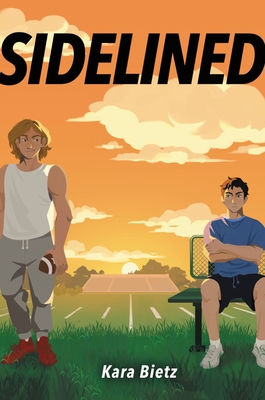 
Usually Arrives in Store in 1-5 Days
An emotional YA romance about small town secrets, high school football, and broken hearts.

Julian Jackson has a short to-do list for his senior year at Crenshaw County High School in Meridien, Texas: football, football, and more football. He knows he's only got one chance to earn a college scholarship and make it out of his small town, and keeping his head down, his grades up, and his cleats on the field is that one chance. And then Elijah Vance walks back into his life, throwing all of his carefully-laid plans into a tailspin.

Elijah and Julian used to be best friends, maybe even on their way to something more than just friends. But three years ago, Elijah broke into the school to steal money from the coach's office, and Julian was the one who turned him in. After that, Elijah and his family disappeared without a trace. And now he's back, sitting at Julian's grandmother's kitchen table. But time and distance haven't erased all of their feelings, and Elijah knows that he finally has a chance to prove to Julian that he's not the same person he was three years ago. But with secrets still growing between them and an uncertain future barreling towards them, it may be harder to lean on each other than they thought.

Kara Bietz was born and raised in New England but now resides in north Georgia with her family. Sidelined is her second novel. She invites you to visit her online at karabietzauthor.com or on Twitter and Instagram @karamb75.

"This sports romance includes all the pageantry of small-town Texas with none of the homophobia. When it comes to their sexuality, both main characters experience nothing but love and support from their community, including their local pastor and his husband.... Engrossing."—Kirkus Reviews

"A vivid picture of football culture in a small town.... It is exciting to see more books featuring queer love stories, especially ones that take place in Texas."—SLJ

"Bietz has done a good job of plotting and developing characters within a Texas-football framework, making this a nice option for readers looking for sports stories with depth or LGBTQ+ themes."—Booklist