Ruth and the Green Book (Hardcover) 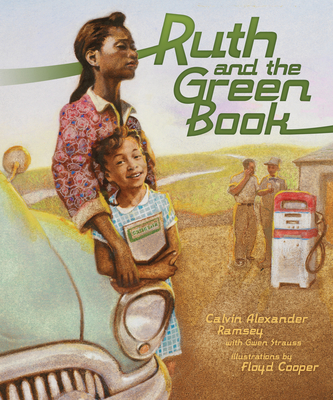 Ruth and the Green Book (Hardcover)

Ruth was so excited to take a trip in her family's new car In the early 1950s, few African Americans could afford to buy cars, so this would be an adventure. But she soon found out that black travelers weren't treated very well in some towns. Many hotels and gas stations refused service to black people. Daddy was upset about something called Jim Crow laws . . .

Finally, a friendly attendant at a gas station showed Ruth's family The Green Book. It listed all of the places that would welcome black travelers. With this guidebook--and the kindness of strangers--Ruth could finally make a safe journey from Chicago to her grandma's house in Alabama.

Ruth's story is fiction, but The Green Book and its role in helping a generation of African American travelers avoid some of the indignities of Jim Crow are historical fact.

School Libary Journal, Starred Review, Nov. 2010Ruth's father just bought a beautiful new 1952 Buick, making it a big day for this African-American family. They are going from Chicago to Alabama to visit Grandma. Ruth is very excited to be traveling, but the family encounters "whites only" restrooms, hotels, and restaurants along the way. It's very discouraging and sometimes scary, but they learn that some friendly faces may be found at local Esso stations, which are among the few franchises open to black businessmen. At a station near the Georgia border, they are introduced to Victor H. Green's The Negro Motorist Green Book, an early AAA guidebook of sorts that listed establishments or homes that would serve African Americans-be it for general services, housing, or meals. Ruth eventually becomes the Green Book specialist in the family, helping to guide them to an auto-repair shop or an inn that would welcome them. But, the best part of the trip is finally arriving at Grandma's, as illustrated by the loving expressions on all faces. A one-page concluding summary discusses the importance of The Green Book, which was in use from 1936-1964, when the Civil Rights Act was finally signed, banning racial discrimination. The realistic illustrations are done in oil wash on board, a self-described "subtractive process." The picture is painted, then erased to "paint" the final product. Overall, there is a sepialike quality to the art, giving the impression of gazing at old color photos. This is an important addition to picture book collections, useful as a discussion-starter on Civil Rights or as a stand-alone story.-Roxanne Burg, Orange County Public Library, CA