The Queen of Wands: The Story of Pamela Colman Smith, the Artist Behind the Rider-Waite Tarot Deck (Hardcover) 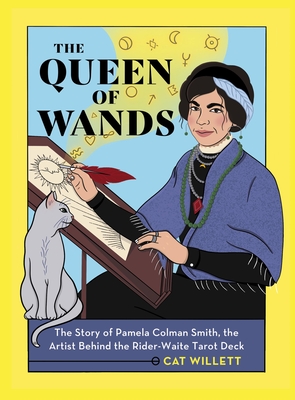 The Queen of Wands: The Story of Pamela Colman Smith, the Artist Behind the Rider-Waite Tarot Deck (Hardcover)


On Our Shelves Now
Discover the life, work, and magic of Pamela Colman Smith, the visionary artist behind the Rider-Waite-Smith Tarot Deck, the most popular and renowned divination deck in the world.

With rich imagery, stunning colors, and an iconic place in the realm of divination, the Rider-Waite Tarot is perhaps the best known deck in the world. Seasoned readers and fledgling diviners alike turn to these cards in search of inspiration, understanding, and even a hint at the future. But the story of their origin is less well known, with their brilliant creator's name stripped away from them for decades. Now, for the first time, mystics, art-lovers, and fortune-tellers will uncover the magical story of Pamela Coleman Smith, rendered in full-color illustrations by artist Cat Willett, and inspired by the work of Pamela herself.

From a childhood spent between the United Kingdom and Jamaica, to early artistic success in New York, to involvement in the secret occult society Order of the Golden Dawn, Pamela -- or Pixie, as she was known to many -- had a life full of enchanted inspiration and profound hardship. Through it all, her art acted as a guiding force, culminating in her custom illustrations for the deck that would become the Rider-Waite Tarot. Though she received little money and almost no credit for her contributions to the magical realm in her lifetime, Pixie's impact on tarot, divination, and the worlds of mysticism and the arts have reverberated for nearly 150 years, and her story serves as an enchanted spark. Depicted in whimsical, full-color detail, with interludes tying Pamela to the resurgence of modern magic and the world of tarot throughout, this singular work is a must-read for witches, creatives, and activists.

Cat Willett is a Brooklyn-based artist and author who holds an MFA in Illustration from the Fashion Institute of Technology. She received her BFA from the University at Buffalo with a minor in Art History and also studied at the Scuola Lorenzo de’Medici in Florence, Italy.

She primarily works digitally, or with ink on paper, and her drawings depict plant life and strong female figures that are deeply rooted in history, with a bit of whimsy.

Her illustration work has been featured by Apple, Madison Square Garden, Doc Martens, the Museum of Arts and Design, and more.