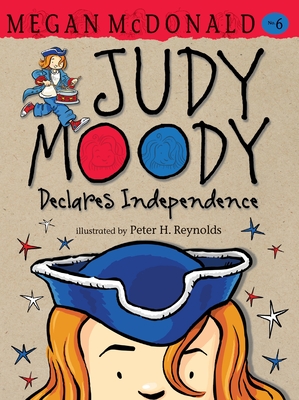 This is book number 6 in the Judy Moody series.

When a visit to Boston spurs Judy's interest in Revolutionary heroes and heroines, she's soon on a quest for more independence in this hilarious episode from Megan McDonald and Peter H. Reynolds. Huzzah!

She, Judy Moody, would hereby, this day, make the Judy Moody Declaration of Independence. With alien rights and her own Purse of Happiness and everything.

Hear ye! Hear ye! Everyone knows that Judy Moody has a mood for every occasion, and now a visit to Boston has put our famous third grader in a revolutionary mood. When Judy meets an English girl named Tori at the Tea Party ship, she is gobsmacked to learn how many liberties her British friend enjoys — her very own phone, private loo, and pounds of allowance. When a day of cheerfully doing her chores doesn't earn Judy Moody more rights, and staging a revolt in the form of a tea-throwing Boston Tub Party has her dad reading the riot act, Judy is forced into temporary retreat. Who would guess that a real-life crisis involving her brother, Stink, would finally give Judy a chance to show her courageous quick thinking — and prove her independence, once and for all?
Megan McDonald is the author of the award-winning Judy Moody series as well as a companion series starring Judy's brother, Stink. She is also the author of the novel The Sisters Club, as well as Ant and Honey Bee, illustrated by Brian Karas. She lives in Sebastopol, California.

Peter H. Reynolds is the illustrator of all the Judy Moody and Stink books. He is also the author-illustrator of the picture books The Dot, Ish, So Few of Me, and The North Star. He lives in Dedham, Massachusetts.
Fans get a history lesson delivered with humor, as Judy petitions for her own freedoms — such as more allowance.
—Publishers Weekly

Fans can cheer 'Huzzah! Huzzah!' for Judy as she connects history with her own story.
—San Francisco Chronicle

Judy's petitioning for parental concessions will spark recognition in many readers, and in both McDonald's charismatic narrative and Reynolds' line drawings, the characterization of a dauntless, endearingly notional third-grader is as spot-on as ever.
—Booklist

INDEPENDENCE is good for curricular ties to social studies units, and McDonald does a great job of transforming the concepts into familiar concerns. Read aloud or alone, this delightful book will inspire children to write their own declarations of independence.
—School Library Journal

Illustrator Peter H. Reynolds portrays Judy’s spunk, and McDonald tells a story that not only offers a fun, fictional heroine, but also admirably introduces a real female heroine from the time of the American Revolution.
—Connecticut Family