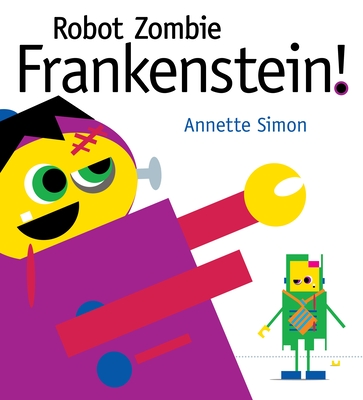 “It doesn't get much better than robots trying to outdo each other! Two robots are just two robots, but what if one is a robot zombie -- or a robot zombie Frankenstein -- or perhaps a robot zombie Frankenstein pirate! You get the picture. The illustrations are brightly colored geometric shapes that invite young readers to use their imaginations. If you need a message, there's the pie. Isn't it better for two competing robots to share a cherry pie? Kids and adults alike will be happy to dive in!”
— Rona Brinlee, The Book Mark, Atlantic Beach, FL

Perfect for high-energy story times, this cumulative tale is a madcap mash-up featuring robots, shapes in motley amalgamation, and . . . pie!

Squares, rectangles, ovals, triangles, and other colorful shapes are sorted and arranged into — two robots! But why stop there? Shape by shape, costume by costume, Robot and Robot play a game of oneupmanship that zips, zooms, and whirrs from friendly to hilariously out of control in nanoseconds. Robot Zombie? How about Robot Zombie Frankenstein? Can you handle Robot Zombie Frankenstein Pirate? What could be next? Where will it all stop? When the race makes a surprise (and delicious) turn, Robot and Robot are happy to be plain old robots — and buddies — once again.
Annette Simon was once a pie-loving advertising creative director who wrote and art-directed national print and TV campaigns. Now, she's a pie-loving author-illustrator who creates picture books, and she blames this particular book on the trickiness of her little sister and the deliciousness of her grandma’s pies! Annette Simon lives in Florida.
A highly entertaining method of introducing a concept... Simon tells a simple, humorous tale of two robots and their imaginative play and quick costume changes... This hilarious title works for one-on-one sharing as participants can discuss the many different shapes shown, and in a group setting where children will laugh at the rivalry of the two mechanical characters. Great fun!
—School Library Journal

Simon uses brightly colored shapes, substantial creativity, and a photograph of cherry pie to construct a story of robotic one-upmanship... The cumulative chaos of the robots’ costumes stands in humorous contrast to Simon’s narrative and visual discipline, as she pokes fun at the human desire to be #1 and acknowledges the “Where did that come from?” nature of in-the-moment creativity.
—Publishers Weekly

In an era in which electronics are always one-upping one another in the global market, it’s nice to see a picture-book equivalent that ends with the consumption of delicious desserts. Apple and PC, take note.
—Kirkus Reviews

ROBOT ZOMBIE FRANKENSTEIN! will provoke squeals of laughter in a large storytime but may also entice the solo reader to try out geometric art of his or her own.
—The Horn Book

The geometric nature of the illustrative components make this a possibly useful companion to a math or art lesson. Kids (particularly boys) will respond to the robots, zombies, etc., to the “Oh yeah? Top this!” tone, and to the inviting possibility of designing their own similar robot illustrations using geometric shapes.
—Bulletin of the Center for Children's Books

You’ll come for the title (I did), but stay for the charming and colorful art, which can be used to help teach shapes, and for the reminder that all things in life — particularly friendship — go better with pie.
—The Florida Times-Union