Jewish Pirates of the Caribbean: How a Generation of Swashbuckling Jews Carved Out an Empire in the New World in Their Quest for Treasure, Religious Freedom--and Revenge (Paperback) 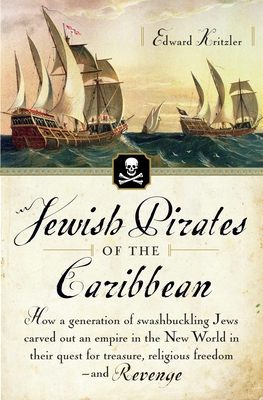 Jewish Pirates of the Caribbean: How a Generation of Swashbuckling Jews Carved Out an Empire in the New World in Their Quest for Treasure, Religious Freedom--and Revenge (Paperback)


Backordered -- Email or Call for Availability
In this lively debut work of history, Edward Kritzler tells the tale of an unlikely group of swashbuckling Jews who ransacked the high seas in the aftermath of the Spanish Inquisition. At the end of the fifteenth century, many Jews had to flee Spain and Portugal. The most adventurous among them took to the seas as freewheeling outlaws. In ships bearing names such as the Prophet Samuel, Queen Esther, and Shield of Abraham, they attacked and plundered the Spanish fleet while forming alliances with other European powers to ensure the safety of Jews living in hiding. Filled with high-sea adventures–including encounters with Captain Morgan and other legendary pirates–Jewish Pirates of the Caribbean reveals a hidden chapter in Jewish history as well as the cruelty, terror, and greed that flourished during the Age of Discovery.
Edward Kritzler is a historian and journalist residing in Kingston, Jamaica.
“Compelling. . . . An ambitious and expansive history of a mostly unexamined aspect of the Jewish expulsion from Spain and Portugal.” —Los Angeles Times

“Yo ho ho and a bottle of Manischewitz! . . . A giddy, breathless dash through the material. . . . Jewish pirates [are] more vividly present in our imagination than we might have suspected.” —Jewish Daily Forward

“Jewish Pirates of the Caribbean is populated by so many remarkable characters–Jewish and otherwise–that picking a favorite is taxing.” —San Francisco Chronicle

“Kritzler should be commended for making us rethink a few historical assumptions. What's ‘Aarrgh!’ in Yiddish, anyway?” —Washington Post

“A book that turns one’s lifelong notions on their ear and makes one rethink history is a find indeed. . . . [A] surprising, yet convincing story. . . . Enormous fun.” —Santa Cruz Sentinel

“A far-reaching chronicle of an oft-forgotten chapter in Jewish history, it also encompasses the role of Sephardi Jews in the opening up of the New World.” —Jerusalem Report

“Fascinating. . . . [Kritzler] exposes a virtually unexplored world in Jewish history. . . . [Jewish Pirates of the Caribbean] is a book that should not just be read, but studied as well.” —San Diego Jewish World

“Kritzler is a storyteller and the story he tells is about the tangled and colorful Sephardi web that stretched from Fez to Amsterdam to Jamaica.” —Haaretz

“This is far more than a book about Jewish pirates. It is a book about early Jewish Settlement in the New world and it makes for fascinating reading. . . . Kritzler illuminates an all but unknown chapter in Jewish history in colorful, salty prose.” —History Book Club

“Revelatory. . . . [Kritzler] details the story of a small group of Jewish merchants and adventurers who pioneered in the Jamaican pirate trade, and helped to create an outpost of religious freedom at the same time. A wonderful story, never before told.” —Jack Davis, author of The Pirates Laffite

“Jewish Pirates of the Caribbean is a wonderfully informed book of maritime history.  Edward Kritzler is a splendid guide on a voyage through a dark and fascinating era of Jewish history.” —Jay Neugeboren, author of 1940, The Stolen Jew

“Pirate rabbis? Warrior Jews? Sephardic seafarers escaping the fires of Inquisition in quest of gold and freedom in the New World? If, like mine, your knowledge of Europe’s fabled Age of Discovery hasn’t featured these colorful and, as Edward Kritzler’s diligent scholarship demonstrates, historically influential pioneers, then Jewish Pirates of the Caribbean presents a tale as essential as it is entertaining.” —Robert H. Patton, author of Patriot Pirates

“What a treasure! Ed Kritzler has literally dived the depth of the Caribbean to bring us a well documented book on a hitherto forgotten role of Jews and their involvement in a most unusual occupation in the New World: Piracy.” —Bernard Diederich, author of Trujillo

“Using a warm style, Kritzler helps us understand why the pirate era occurred and how the Jews fitted into Caribbean history at that time. He also brings insights to little-understood historical facts, such as what really happened to that famous boatload of Jewish refugees that sailed from Recife to New Amsterdam in 1654; why Jamaica became a haven for Jewish merchants and how this morphed into its development as a center of the pirate trade; as well as the origin of the boucaniers, later known as buccaneers.” –Andree Aelion Brooks, author of The Woman Who Defied Kings and Out of Spain

“Ed Kritzler’s book unlocks the long buried Jewish heritage of many famous pirates and their fascinating long forgotten empire building activities. This book is a must read for pirate lovers and history buffs alike.” —Gail Selinger, pirate historian and author of The Complete Idiot's Guide to Pirates

“Everyone is entitled to her own opinions on the matter but no one has given the subject of Jewish pirates more love and attention than Ed Kritzler. He is the aficionado of Jewish Pirates! Gangway! All Aboard! Onto the gunwales! We're off! What wild adventure!” —Rachel Frankel, author of Remnant Stones