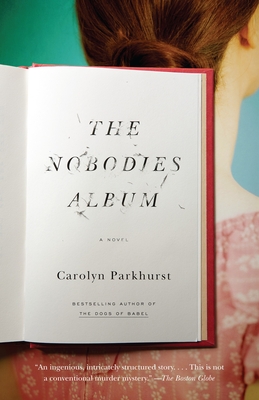 “Octavia Frost is a woman trying to rewrite her past by rewriting the last chapters of her very autobiographical works of fiction. When her estranged son Milo is accused of murder and she goes to be with him, Octavia finds that the wounds of the past can be revisited, and perhaps even be healed, but they cannot be made to never have existed at all. If you've never read Carolyn Parkhurst this is an excellent place to start.”
— Jessie Martin, Nicola's Books, Ann Arbor, MI

Bestselling novelist Octavia Frost has just completed her latest book, a revolutionary novel in which she has rewritten the last chapters of all her previous books and removed clues about her personal life concealed within, especially the horrific tragedy that once befell her family.

But on her way to deliver the manuscript to her editor, Octavia learns that her estranged son, Milo, a famous musician, has been arrested for the murder of his girlfriend. Did she drive her son to violence? Did Milo murder anyone at all? And what exactly happened all those years ago? As the novel builds to a stunning reveal, Octavia must consider how this story will come to a close.

Carolyn Parkhurst holds an MFA in fiction from American University. She is the author of two previous bestselling novels, The Dogs of Babel and Lost and Found, as well as a children’s book, Cooking with Henry and Elliebelly. She lives in Washington, D. C., with her husband and their two children.

“An ingenious, intricately structured story. . . . This is not a conventional murder mystery.” —The Boston Globe

“A pinhole glimpse into the mind of a fascinating woman for whom life and fiction are stitched tightly together.” —Entertainment Weekly

“Parkhurst is wildly gifted at depicting mother-and-child moments, and they lift her entertaining new book above the fray.” —The Plain Dealer

“A mystery, and so much more. . . . Finely crafted.” —The Philadelphia Inquirer

“All [The Nobodies Album’s] pieces—the recurring patterns, mirror images and multiple allusions of Octavia’s history and fantasies—seem to shake together like a kaleidoscope, settling into place in a satisfying manner both predicted and unexpected.” —San Francisco Chronicle

“The great pleasure of reading The Nobodies Album arises out of keeping track of the constantly shifting relationships among a small group of paranoid people quarantined from the rest of society by their fame. . . . Parkhurst, who clearly revels in language (Milo’s band is called ‘Pareidolia’), gets maximum mileage out of her cast of novelists and rock star poets.” —Maureen Corrigan, NPR

“As she did in The Dogs of Babel, with its human protagonist trying to coax forth information from his dog, Ms. Parkhurst once again proves that she writes with crisp precision but can also make heads spin.” —The New York Times

“Like any good mystery, Parkhurst offers us suspects without ever calling them such. . . . The Nobodies Album succeeds as a mystery, but also as a work of psychological realism. . . . [Parkhurst] is a writer of undeniable literary talent, concerned with meaning and character and all that good stuff, but she also tells one hell of a story.” —Bookslut.com

“Carolyn Parkhurst . . . [has] an innate grasp of the fatal power of words. She understands the power of language, and how one misconstrued sentence, or a confession never uttered, can be devastating.” —USA Today

“The Nobodies Album is a family drama, psychological inquiry and literary mystery, offering something for every reader. . . . Parkhurst has an uncanny knack for truly inhabiting her characters, laying their inner workings bare, yet here she cleverly uses this introspection to question the extent to which we can ever truly know another human being, even one bound to us through blood. The Nobodies Album opens with the audacious first line, ‘There are some stories no one wants to hear,’ but when Parkhurst’s stories are the ones in question, nothing could be further from the truth.” —BookPage

“A mystery well worth investigating. . . . Sharp and engaging. . . . A confident novel that has plenty of narrative muscle.” —The Independent (London)

“All of Parkhurst’s novels fairly burst with plot, and The Nobodies Album is no exception. . . . Few authors are as adept at infusing page-turning storylines with emotional depth, both tragic and redemptive. . . . Packs its own resonating punch.” —The Onion’s A. V. Club