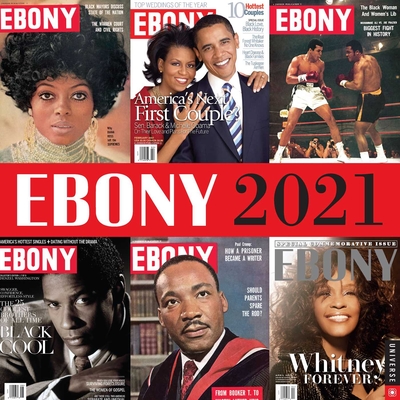 
Email or call for price.
Ebony 2021 Wall Calendar celebrates the 75th anniversary of Ebony magazine. This collectible wall calendar features 36 of the most dynamic covers from this highly celebrated and revered magazine.

The covers from the first black-oriented magazine in the United States to attain national circulation and No. 1 source for an authoritative perspective on the black community includes some of the 20th century's most respected African-American celebrities, newsmakers, athletes, influencers, and artists, such as Martin Luther King, Jr., Michelle and Barack Obama, Oprah Winfrey, Sidney Poitier, and more.
Ebony is a monthly magazine that focuses on news, culture, and entertainment. Founded in 1945, its target audience is the African–American community, and its coverage includes the lifestyles and accomplishments of influential black people, fashion, beauty, and politics.