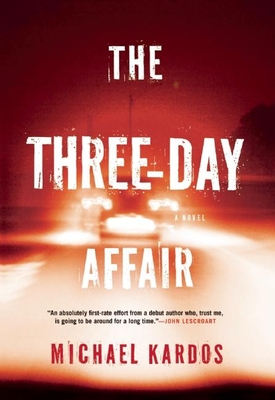 By Michael Kardos
Email or call for price
Out of Print

The first debut novel from the newly relaunched Mysterious Press introduces a phenomenal new voice in the realm of crime fiction. Will, Jeffrey, and Nolan are lifelong friends. Each have gone their separate ways as adults, living their own lives while forging their own careers. They have no reason to believe anything extraordinary will befall them. Until one shocking moment changes everything... Will is a part-time drummer who spends the rest of his time in recording studios. He has lived a sheltered existence. Then one night Jeffrey attempts to rob a convenience store, drags a young woman into Will's car, and shouts a single word: "Drive " Shaken and confused, Will obeys. Suddenly three ordinary men find themselves completely out of their element, holding a young girl hostage without the slightest idea of what to do next. They are already guilty of kidnapping and robbery; it is only a matter of time before they find out just what else they're capable of. For these four people, three days will decide their fate--between freedom and prison, innocence and guilt...and life and death. In the tradition of Scott Smith's classic A Simple Plan, THE THREE-DAY AFFAIR marks the emergence of a truly talented new crime writer.

Michael Kardos is the author of the story collection One Last Good Time. His short stories have appeared in The Southern Review, Crazyhorse, Prairie Schooner, Blackbird, Pleiades, Prism International, and many other magazines and anthologies, and were cited as notable stories in the 2009 and 2010 editions of Best American Short Stories. He lives in Starkville, Mississippi, where he co-directs the creative writing program at Mississippi State University and edits the literary journal Jabberwock Review.

A taut thriller that goes least where you expect it to, but goes there beautifully.” --Tom Franklin, New York Times bestselling and Edgar-award winning author of Crooked Letter

The Three-Day Affair is one of the most impressive debut novels I’ve ever read. Gripping and relentless, it will grab you by the throat and make you finish it. Michael Kardos absolutely nails it. Watch out for this guy.” -- Steve Hamilton, two-time Edgar Award-winning author of Die a Stranger

A wonderful piece of literary suspense craftsmanship. Line by line, Michael Kardos dazzles with prose strength and style, and the bad-day-gone-worse story does not let up... A fascinating character study and engaging thriller.”--Michael Koryta, winner of the L.A. Times Book Prize and author of The Prophet

An outstanding thriller that has everything: graceful prose, a terrific plot, unbearable suspense, great surprises, and an intelligent and sympathetic narrator who will break your heart. An absolutely first-rate effort from a debut author who, trust me, is going to be around for a long time.” --John Lescroart, New York Times bestselling author of The Hunter